At The Peak of Hurricane Season

It's a regular feature around here to mock the annual hurricane forecasts (for example), and especially the Global Warming Alarmists when they predict an active hurricane season.  The guys who do this officially for NOAA, though, predicted this would be "normal or below" season, and they're looking pretty good.  The official numbers were 8-13 named storms, 3-6 of which would become hurricanes and 1-2 which would become major (Cat 3 or above) 'canes.

This is the statistical peak of the Atlantic hurricane season and there are no named storms out there.  There is a depression around the Azores and a tropical wave that's passing overhead this evening which the hurricane center says has a 40% chance of developing into a tropical system within five days.  They say that depression will be a hurricane by Monday and what we call a fish storm.  It looks like it will have no effect on any land. 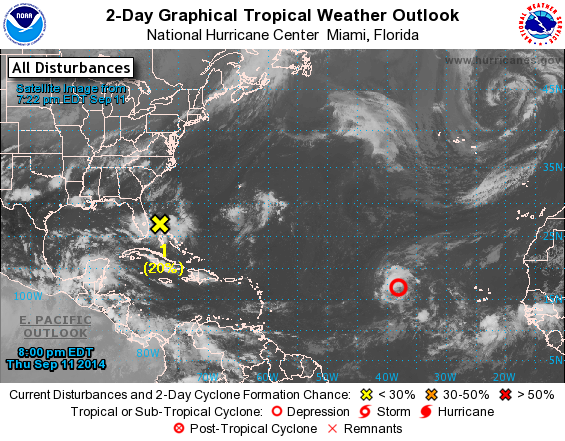 So far, we've had named storms through the letter "D", Dolly, which was a tropical storm for a few hours between forming in the western Gulf of Mexico, and then going ashore around the Texas/Mexico border.  Four storms, no storm lasted more than a week, but three of them made hurricane status.    Ryan Maue's Accumulated Cyclone Energy metric shows that ACE in the Atlantic basin is 39% of a normal year.  The entire planet is at 89% of normal this year, with only the Eastern North Pacific being well above average.

The season tends to slow down faster than it starts, with the peak being short-lived.  Within another couple of weeks, we'll be saying good-bye to hurricane season 2014.