China And US Mirror Each Other

It's easy to find economic pundits saying China is in economic trouble; heck, I've done it myself.  To some degree they are in trouble!  That CNN article (first link) points out the China's government lies about their economic statistics all the time.  China's government manipulates their stock markets - and their citizens - to make it look better.  Critics will also point out that they're up to their eyeballs in debt.

I say: big deal.  Our government lies to us about every economic statistic; the Federal reserve manipulates the stock market every day and has been doing so for ages; and when it comes to debt, we're the most indebted nation in recorded history.  All of those things make them exactly like us.

China has a corrupt, autocratic government that pretends to embrace the free market but is really all about the leaders' personal benefits.  Again, just like us.

Keith Fitz-Gerald of Money Morning writes at Bonner and Partners


Washington openly manipulates every data stream dished out to the American public as gospel. There are seasonable adjustments, cost-of-living improvements, and constantly changing calculations.

The U.S. government, for example, has changed the way it calculates the Consumer Price Index (CPI) more than 20 times in the past 30 years. Labor stats are calculated six different ways by the Bureau of Labor Statistics. Gross Domestic Product is deflated or inflated at will depending on “methodological changes” over time. It’s revised incessantly.

To be fair, though, every country on earth manipulates its currency to try to gain advantage.  We're currently in a worldwide currency war consisting of just this sort of action.  Countries are trying to devalue their currencies to make their exports more attractive, or like the Fed, deliberately trying to import inflation from other countries because of their dire fear of deflation.

Like Fitz-Gerald, I think China's problems are short term.  The demographics are on their side: they have a population that is growing and they're an enormous country.  They now have the world’s largest middle class at more than 600 million people. That will grow to more than 1 billion by 2020.

By 2020, I predict China will be the world's largest economy, and the US will have continued its decline. 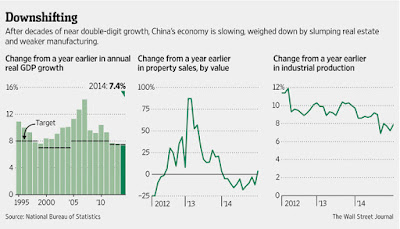