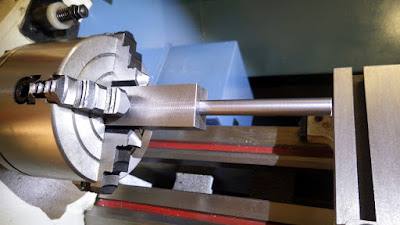 Any idea what that is?

That's the barrel of my GB-22 test fit into the block that will hold it in place.  The holder isn't complete, so I'll pull the barrel out in the morning.  The only work that has to be done to it is to add four holes for 1/8" spring pins to hold it in the frame, and 3/16" slots along the middle of the top and bottom where it slides into the frame. It's part #2 in this graphic from Serbu Arms' Website. 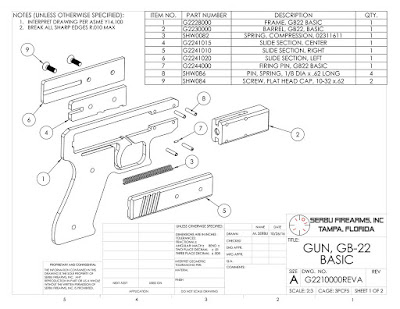 Adaptive Curmudgeon said he loves it when I say things like this:  the barrel measured 0.368, so I thought a 3/8" (0.375) drill bit would be too big.  I was going to get a reamer in .373 (.005 oversized), but thought I'd measure my "best" 3/8 drill bit.  It was .370!  So I tried drilling out the holder, figuring that it might end up being a "test cut" that ruined the piece, and it came out more like 0.371 (it was still warm, so maybe I'll recheck it in the morning).  I'll eventually stake the barrel in place with either red LocTite or JB Weld.  I'm not sure if I'm going to cut it shorter and crown it.  Da bomb would be to cut it in two equal pieces, crown both and cut a chamber in the new half!

And not a single lesbian squirrel was even inconvenienced in the making of this post.