The SLS core stage was shipped (literally, by barge) from the Stennis Space Center to the Kennedy Space Center here in Florida this week.  The barge arrived in Florida on the 27th, traveling to the turning basin in front of the Vehicle Assembly Building.  Transfer to inside the VAB was accomplished this afternoon.  At this point, it's now being referred to as the core of Artemis 1: the first, unmanned mission the SLS will fly. 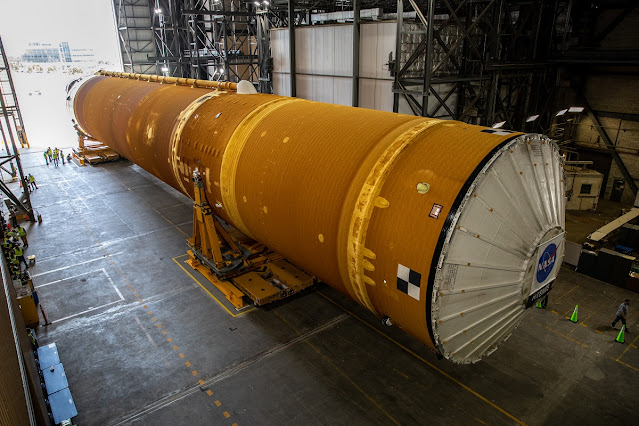 Teams from the center’s Exploration Ground Systems and contractor Jacobs will perform checkouts ahead of integrating the massive rocket stage with the twin solid rocket boosters, Orion spacecraft, and additional flight hardware ahead of the Artemis I launch.

Artemis I will be the first integrated test of SLS and Orion and will pave the way for landing the first woman and first person of color on the lunar surface. It will be a proving ground for deep space exploration, leading the agency’s efforts under the Artemis program for a sustainable presence on the Moon and preparing for human missions to Mars.

As you would imagine, it's not exactly a trivial exercise to handle something massively heavy yet fragile to loads it wasn't designed for, but that's coming very soon as they need to transfer the core stage to a vertical position for the beginning of the integration process. 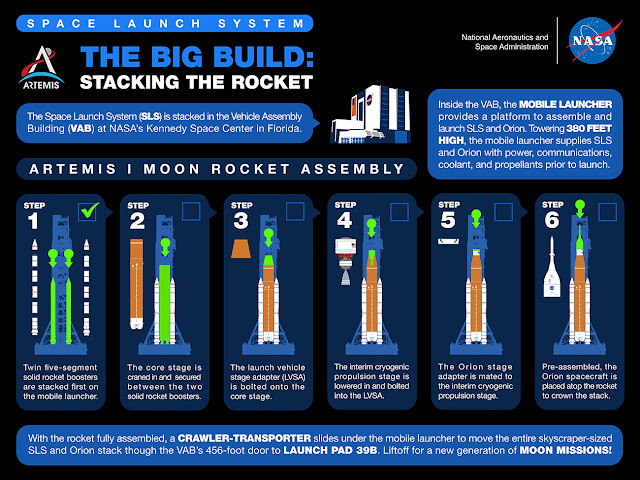 The twin solid rocket boosters are completely stacked; that was completed in early March.  Despite their similar appearance to the Space Shuttle Solid Rocket Boosters, they're reported to be the largest and most powerful solid rockets ever made.  Each booster produces 3.6 million pounds of thrust.  An important detail to point out is that, like the Shuttle, those SRBs will support the entire weight of the core stage and everything that's mounted to it.

John Honeycutt, the SLS program manager, said, “with the delivery of the SLS core stage for Artemis I, we have all the parts of the rocket at Kennedy for the first Artemis mission.”  NASA is still aiming for a launch before the end of the year, although they'll openly say that's “challenging.”  The original date published was this coming November, but that was before the test window at Stennis ballooned up to nine months.  To have the schedule hammered that badly and not move the launch date out by more than a month would be truly remarkable.  FWIW, I think this goes beyond challenging all the way to improbable.  I wish them luck but I'd be really surprised if this isn't delayed until well into '22.  I think a three month delay into late February/early March would still be remarkably good.

I can't let this column go without noting that part of the quote above made my skin crawl and filled me with dread.  “Artemis I will .... pave the way for landing the first woman and first person of color on the lunar surface.”  So the goal of the Artemis program is to send identity politics into the universe?  If there's anything about humanity that deserves to die off on earth and not spread it's identity politics.  It was bad enough when they said Artemis was to land the first woman and the next man on the moon, but that's apparently too mild today.

I think I've been clear that I think SLS has been a horrendously bad waste of money.  The decision to kill a program after so much has been spent on it is a tough one for a politician to make.  They're subject to the sunk cost fallacy over things like this.  They have to admit they threw away billions on something like SLS and never got anything for it.