Something Here Is Fishy

A link in the daily newsletter I get from FEE (the Foundation for Economic Education) took me to Amazon's Twitter account and a post from Jeff Bezos saying that they want corporate taxes to go up and they support the Biden administration's efforts to raise taxes. 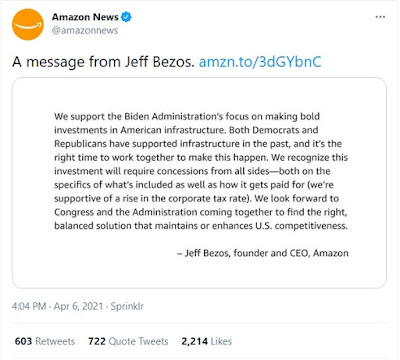 Amazon has also lobbied aggressively for other big-government policies like a $15 federal minimum wage. This should strike you as a giant warning sign; it's something we've commented on this about a godzillion times in the life of this blog.  When Big Business colludes with Big Government it’s virtually always because they know the government roadblocks instituted will reinforce their market dominance and ultimately be to that Big Business's benefit.  After all, Big Business Amazon (in this case) already employs buildings full of accountants and lawyers to navigate the new laws.  Smaller competitors don't.  The expenses are harder on smaller businesses.

All big tech companies, Facebook, Amazon, Google, Twitter, Netflix; all of them got where they are by disrupting the existing business environment - puncturing the equilibrium.  Because of that they all live in abject fear of being knocked out of dominance by another small, disruptive company.  Cronyism with Big Government is a way they fight back.  Why innovate when you can buy a congress critter?

It remains as valid now as it has been forever: ask someone if the people who pay the sales tax a company collects on what they sell are the same people who pay who the company's income tax.  If they don't think they're the same group of people, the company's customers, they're economically illiterate.  As this meme (also from FEE) points out, in conditions where the prices a company can charge can't go as high as the tax increase demands, studies have shown that the company's employees are subjected to conditions that get the rest of that revenue. 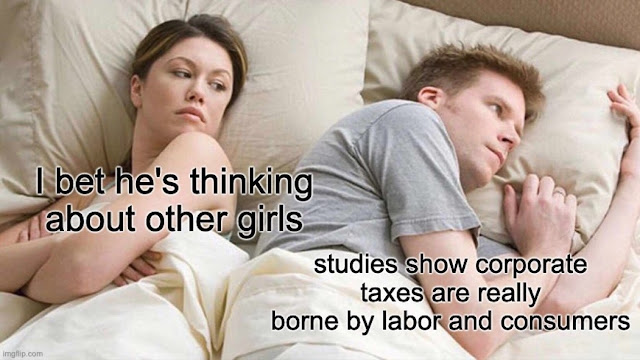 Let me let you in on not quite a secret:  Amazon and Jeff Bezos know this. They just hope that you don't, and that you mistake their attempts at cronyism for altruism.