To begin with, credit where credit's due - to Zendo Deb at 357 Magnum for the link that got me started, but I forgot which post the link was in.  I had to save the article to read later, so I copied the URL down and promptly lost the context.  I just know it was in one of her lists of links.  You do read her, don't you?

The story is a link to an article on The American Conservative called "Modern Monetary Theory for Conservatives" by an author named Jonathon Culbreath.  Since his author page has three articles there in the last year, it's safe to say he doesn't provide a lot of content for TAC.  The little biography I can find for him simply says, "Jonathan Culbreath is a writer living in Southern California. He is an assistant editor at The Josias, a site dedicated to the recovery of Catholic Social Teaching."

Let me start by saying the article doesn't cover anything new about Modern Monetary Theory (MMT hereafter); he quotes liberally from Dr. Stephanie Kelton's book The Deficit Myth (subtitled Modern Monetary Theory and the Birth of the People's Economy) about the topic.  (Is anyone besides me creeped out by the term "People's Economy?")  The only thing that seems new is the attempt to convince people who see endless deficit spending as leading to serious trouble in the long term that deficits are fine.  MMT says governments aren't like people or companies or anyone else in the real world who need to have a balance sheet that balances.  Culbreath thinks conservatives should be OK with deficit spending, but just care about what the spending pays for.


As predicted, conservatives have responded to the latest $1.9 trillion stimulus package with outrage about our growing national debt, and the taxes that will be required from our children and grandchildren to pay for it. While there may be many things to criticize in the package, it is significant that despite the fact the defense of the family is supposed to be a hallmark of conservative politics, not even a generous family policy embodied in an expanded Child Tax Credit could assuage many conservatives of their mortal fear of government spending.

This reluctance to accept government expenditure can be explained by many factors, some of them ideological and political. But one important and somewhat understudied factor is a faulty and outdated economic theory. Without defending all the details of the latest stimulus package, conservatives should re-examine the economics that underlie the tendency on the right to condemn any instance of large-scale government spending. On the basis of such a re-examination, the policy conversation could then shift away from whether government spending is economically justifiable and towards what kinds of spending are productive and worthwhile.

The article goes on about the theory and generally talking it up.  In general, the article (like everything I've read before) says "you're wrong in the way you think about things" but doesn't offer proof.  There are no reports that some other countries have done this and the world has gotten better for them.  As one of my economic mentors, the (long-retired) Mogambo Guru put it long ago (2009),


Whether or not this theory is true, I don’t know, but I don’t think so, as I have never read anything like, “From the moment that the government started creating and spending large amounts of money, everything got better and better, and the more money that was created for the government to spend, the better things got, until they reached Utopia and everybody lived happily ever after.”

And that's the problem I have with MMT.  As I said when I first read about it, "Well, actually, it's not new.  And it kind of dignifies it to call it a "theory."  It's a particularly stupid idea, which is to say the idea is to do what they always do: just keep spending what you don't have.  They just gave it a name they can hide behind." Remember, in science, a theory is an explanation for observed facts that have been demonstrated in controlled experiments.  If the theory - explanation - is proven to successfully predict what's going to happen in the experiments, it's standing is improved.  If proven often enough and well enough, and most especially never fails to predict, it becomes considered to be a natural law.   The only idea in economics that approaches the level of natural law is the Law of Supply and Demand.

What would it take to convince you that their way of looking at money is more accurate than the view that has held for all of human history?  Would it take more than some glib pronouncements from some professors?  Perhaps watch it work in various economies around the world over some length of time?  I would like to see it tested in various economies for a few nation*centuries, which just ain't happening.  I wouldn't live long enough to see it, anyway.


Inflation only occurs, at least in any damaging degree, under certain conditions. Foremost among those conditions is full employment. When the economy is at full employment, which it rarely is, then the overall purchasing power within the economy may be considered to be at full capacity. At this point, an injection of more money into the economy might result in inflation, since it would likely push demand to outstrip supply, thereby causing prices to soar higher and purchasing power to decline at a dangerous rate.

Conventional economists say inflation occurs when sellers value what they're selling more than what buyers are offering.  In the case of rampant government spending, the seller says they can't buy what they need with the dollars being offered and demand more.  Are we having inflation?  To borrow a graphic from Gun Free Zone: 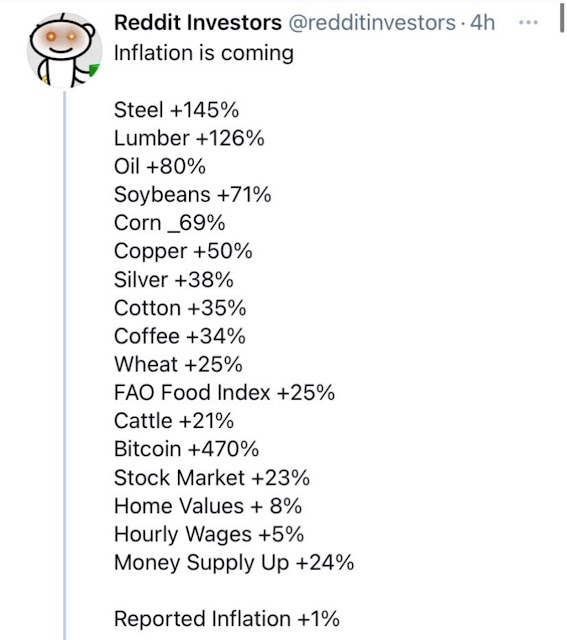 I'd say that real inflation isn't coming, it's here.  Their MMT fails to predict this, because with about 60% of the work force employed we're a long way from full employment and they say full employment is a precondition for inflation.  Furthermore, consider the Jimmy Carter years in the 1970s when inflation was the highest in the century.  Employment wasn't full then either (graph of employment levels in this post).  I say MMT fails the test of being able to predict the outcome of an experiment.