And the Answer is: A Head Fake

The Ben Bernank and the Fed board of gub'nors released a new plan today: let's get rid of $400 billion dollars in short term bonds, and buy long term bonds!  They faked us out - looked like they were going the QE route, but acted more like folks with max'ed out credit cards.  Which they pretty much are.

(and before I move on, JDA has the most excellent photoshop of Bernanke ever... I'm going to respect her copyright and say clicky the link and go look... I'll wait.)

The 30 year bond then cratered, hitting its lowest level since Jan. '09: 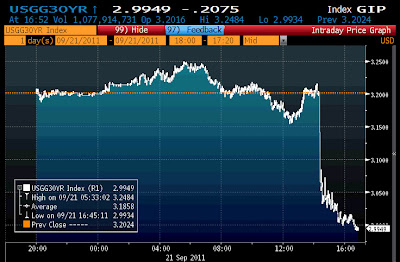 Followed by the DJIA itself

The idea here is that the Fed has too much money in short term bonds that have to be paid back in the next couple of years.  This action essentially trades the short term bonds for long term bonds, enabling them to kick the can a little farther down the road, and essentially saying the economy isn't going to get much better for perhaps five to ten years.  I think what the Fed is doing is sort of like paying off one credit card with another; one of those "no payment for 90 days!" offers.  So, for the record, I was wrong yesterday in predicting another QE.

The spin and PR is flying already.  They are doing everything they can to keep from crashing into the mountain below them, and are incapable of not messing with the economy.  Fundamentally, I don't think they changed the picture at all.  I still expect inflation followed by austerity measures everywhere; the march of the FSA and a prolonged period of bad history, "with a 25% chance of the Zombie apocalypse".   Gold and silver?  Might go on sale due to knee-jerk reactions, or acute needs for cash to cover market shorts.  Prepare to buy on the dips.