"Winning Through Intimidation" was a 1980s-era book about management and sales, but has often been talked about as a book about office politics (and other intimidating situations).


"President Obama, this is your army. We are ready to march. Let's take these son of bitches out and give America back to an America where we belong," Hoffa added.

And if that isn't enough, vice president Gaffe Machine addressed an AFL-CIO rally, telling them "you are the only folks keeping the barbarians from the gates".

So on one afternoon, enemies of the unions are "sons of bitches" that need to be "taken out", and "barbarians at the gates".

This is all about intimidation.  Union thugs know nothing but intimidation and physical violence.  They appear incapable of winning an argument by logic and reasoning so they most often resort to intimidation, beat downs and violence  (all of these just easy pick links - take your choice from dozens). After all, if logic and reasoning were on their side, would they crank the nastiness up to 11?  They could just put forward a reasoned position in the papers and win folks over.  Instead, they believe in beating down and "punish(ing) our enemies".

Who are they trying to intimidate?  You, of course.  You, me, everyone who might not want to fund their infinite demands out of our pockets.

All of this reminds me of one of my favorite sayings that I'm sure everyone has seen:


Be polite, be professional, but have a plan to kill everyone you meet.  Because they may want to kill you. 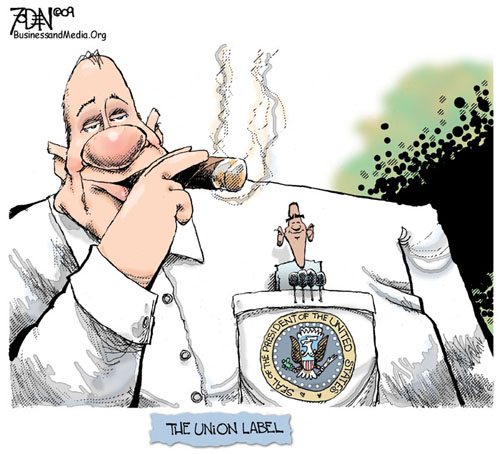 Stay armed, and stay alert my friends.  Instead of rhetoric, crank the situational awareness up to 11.
Posted by SiGraybeard at 9:19 PM