Ready For the Week?

Time to strap on your big boy (or girl) pants.  This will probably be a rough week.  If it's not, hang on, this situation isn't over, yet.

Bayou Renaissance Man, one of my every day reads, has done some very good work on the economic big picture lately.  This piece talks about some of the very large bombs that are likely to drop soon.
and there's a lot more.  You should RTWT.

Several writers have scaled the US budgetary problems down to a more comfortable size ("a billion here, a billion there, pretty soon it adds up to real money" - Everett Dirksen, US Senator, 1960s) and Peter adds this from National Review Online:

How long do you think such a household budget would exist without a creditor demanding money or cutting off the credit line?  Any doubt S&P was wrong to downgrade our credit rating?  The deficit doesn't matter, because we can print more - as the Keynesians in the central banks seem to think?  If so, prepare to pay a million dollars for your McWendyBurger.

As Denninger says, Welcome to the Collapse of 2011.   For various reasons that Karl covers, this one figures to be worse than the crash of '08.  Markets are re-valuing everything, and they're trying to figure out what is real.  This could take a while and be extraordinarily painful. 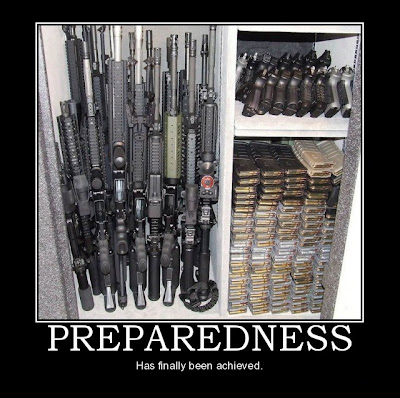