So yesterday, 9/17, was supposed to be a "Day of Rage" to occupy Wall Street.  Only it didn't go over so well.  Wall Street is peaceful this morning. 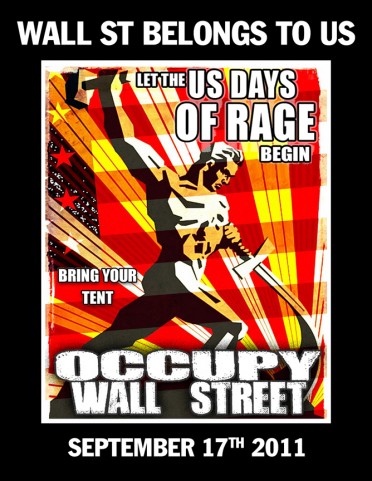 A couple of hundred protesters showed up, and my guess is they don't have much of a clue what they're actually protesting.  Hardly a dominating crowd, the Blaze reporter says, "This crowd looked more like Ben and Jerry’s hippies than communist storm troopers."  And it featured morons like this (from the linked article at the Blaze): 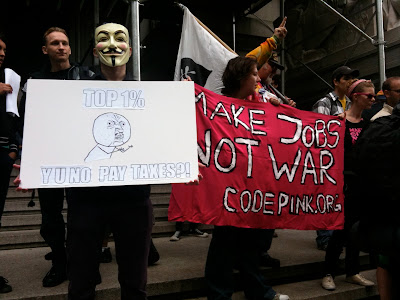 who may have nice anarchist spirit, doncha know, but doesn't realize that the top 1% of wage earners already pay over 40% of all the taxes collected in the US (here, for one example). (Hey, Mr. "y u no pay taxes?!" - y u no spend 5 minutes reading?!)

The really delightful irony is that these low-brow communists, paid for by ACORN, SEIU, George Soros and his many foundations, complain about the TEA party, yet are complaining about exactly the same things!


The antidote for crony capitalism, tax loopholes, et al is not to increase the power of the government to regulate them, but to get rid of big government. Which, funnily enough, is what the Tea Party has been advocating all along.

Did none of these enlightened Day of Rage organizers happen to notice that Jeff Immelt, the CEO of GE, was an honored guest of President Obama's at his 'jobs' speech to the joint session of Congress? I mean, come on! It's like they're not even trying to hide how easy it is to get in bed with the administration. And if these protesters really hate corporations, I cannot even conceive of how labor unions are avoiding their ire.

How much more "in bed" with business can an administration be?  I thought W was bad, but the revolving door between Goldman Sachs and the Fed.gov has been going on for a long time.  I figure if Goldman donates a million dollars to the president's campaign, the might expect something in return, but the improper relations with all sorts of companies really seems to be at an all time high.  I wonder if these protesting clowns will realize that the banksters they're protesting are paying for them to be there?  Qui bono?

One of the facts of being a 50-something cyclist is that most of the products marketed to cyclists are aimed at a younger, higher-testosterone demographic.  For instance Performance Bicycle used to sell shorts they called "Performance Rage".  I always used to say, "at my age, they're more like 'Mildly Annoyed' shorts.  Or 'Really Miffed' shorts."  That seems to be the tone of the Day of Peeved.
Posted by SiGraybeard at 12:59 PM

Labels: commies and other idiots, Events, follow the money