You know, Tam needs a link from me about as much West Texas needs another grain of sand, but this wonderful post led me to Jennifer who led me to Minutemen.

Earlier this week, some government wonk from one of those academic factories that squirt out government wonks like Ohio tourists with dysentery in Tijuana came up with the pronouncement that we should not talk about "government" like some big evil empire, but as our "Federal family".  To which Jennifer replied:


So if I ever choose to fly again, I shouldn’t worry about being probed by some degenerate government thug, I should just think of it like a visit to Uncle Pervy’s secret closet?

Minuteman reminds us that Government is Force, and points us to Guns, Cars and Tech, who reminds us, it all ends with puppy-killing SWAT teams.  He says, "It seems ridiculous that this could happen,right? Well,all it takes is one word:  No." and goes on to paint an entirely realistic scenario.


Government:  We need to double your taxes so that umpires don’t forget to turn off the ballfield lights after games are over.

Government:  Um….but we need it.

Government:  Well,it doesn’t matter what you think. You have to pay it anyway.

Government:  [Later] I see you didn’t pay the new tax rate. Here’s your updated bill with penalties and interest.

Government:  Okay,fine. See you in court!

Government:  What? BUT YOU HAVE TO GO!

Government:  Fine. We waved a magic wand and took ownership of your house. You have to get out.

Government:  [Press Release] SWAT was deployed today and killed a barricaded suspect. Multiple attempts to negotiate were rejected,so SWAT had to move in. The suspect resisted arrest and was shot 37 times. We waited a couple of hours and then found out he was dead. 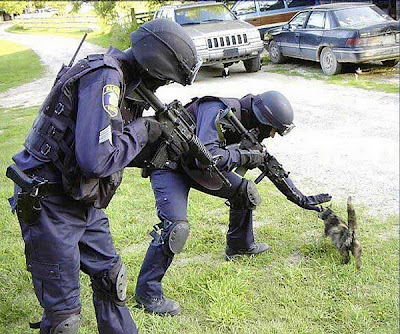