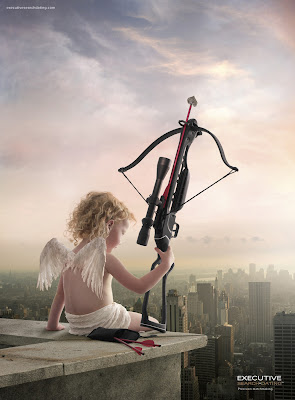 Don't recall where I found this, but I've had the image a long time - probably last Valentine's or the one before that.  Obviously produced by Executive Search Dating,  whom I have no affiliation with.  Just liked the picture, although that crossbow doesn't look like it fits little cherub cupid very well.

Mrs. Graybeard and I have been married a long time, over 30 years, so we've seen lots of Valentine's day celebrations - and a couple that were less than celebratory.  One time, about 20 years ago, Major Southeast Defense Contractor was engaged in serious competition for a contract worth billions.  Several days before the 14th, they had me working lots of (free) overtime, then sent me to southern California to put on a demonstration.  I was not only out of the state, I had been unable to do anything about the holiday.  It literally was hard to get time to even make a phone call - that was before cellphones on our bodies 24/7.  When I got back, I hit the card shop, hoping they had some Valentines still out.  There wasn't a pink card in the store.  Everything was green for the next holiday - St. Patrick's day.  So I got one of those, captioned everything on it with a Valentines theme, and re-wrote it into an elaborate joke.

It's still one of my favorite tricks. The other involved buying a Spanish card and horribly mis-translating everything.

A happy day to you and yours.