My Pick For Secretary of Defense

It's a shame the execrable Chuck Hagel was confirmed as SecDef, and while it was largely a party line vote, and the Evil Party still controls the Senate.  Frankly, I'm disappointed with Rand Paul's explanation of why he voted for him.   Hagel is an embarrassment.  The fact that the Iranian opposition in exile is against him while the current Iranian government endorsed him tells me that it was not likely a disinformation campaign on their side to get us to nominate someone else.  A very likely scenario for the new SecDef and his crew to war game is a problem with Iran.  He's pretty much on their side - like the president. The fact that Louis Farrakhan endorsed Hagel is another straw against him.

Plus, the guy looks like a milquetoast.  Just not threatening looking enough.  I think we should have a guy who's not just tough, but looks like he just might be crazy enough to push that shiny button.  Fred Thompson is tough, and believable, but doesn't have the crazy I'm looking for.  I'm thinking more like Jack Elam. 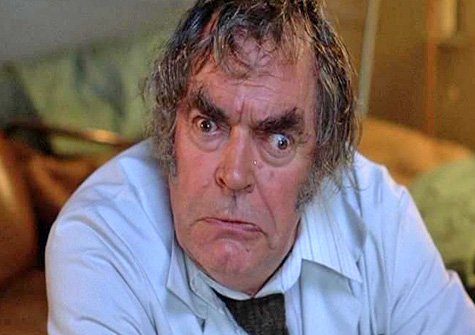 This is Jack in one of his saner looking roles, Dr, Van Helsing (yes!) in "The Cannonball Run".  When he points a gun at you, you think "this guy is crazy enough to kill me for no good reason".  America's enemies should think that way about us.  Not as the bankrupt, doddering, weak old fools they currently do.

OK, technically, being dead and all, we can't have Jack as Secretary.  And it's too late, anyway.