Yesterday was the Winter Solstice; the day the sun stops and stands still in its voyage south and then starts north again. From this point, every sunrise will be a little farther north until June's summer solstice.

Rev. Paul and those in colder climes may feel happy that going through the shortest day of the year means the days will start getting longer.  It will be imperceptible at first, gathering speed as the calendar approaches spring.

Yesterday's APOD, the Astronomy Picture of the Day, shows the southern view looking down the Tyrrhenian Sea coast from Santa Severa toward Fiumicino, Italy, and was taken by Danilo Pivato . It's a composite of 43 precisely timed exposures, taken on the solstice in 2005.

Cool shot, but it's only one day.  Wouldn't it be neat to see the sun's wandering over the course of a year?  Of course it has been done.  It takes a bit more planning, but you just need to take a photograph at the exact same time regularly throughout the year and be sure before you start that the image will fit on the film or sensor.  Once a week is good, round number and you pretty much can't make the exposures too short.  Take the photograph when the sun is high enough above the horizon to record on the winter solstice, and leave the camera pointed at the same place for a year.  Add one longer exposure picture when the sky has a pretty look you like and maybe you can get a picture as pretty as this one.  The photograph shows a curve called an analemma.  The winter solstice sun is the bottom middle of the elongated figure 8; the summer solstice at the upper, narrower end. 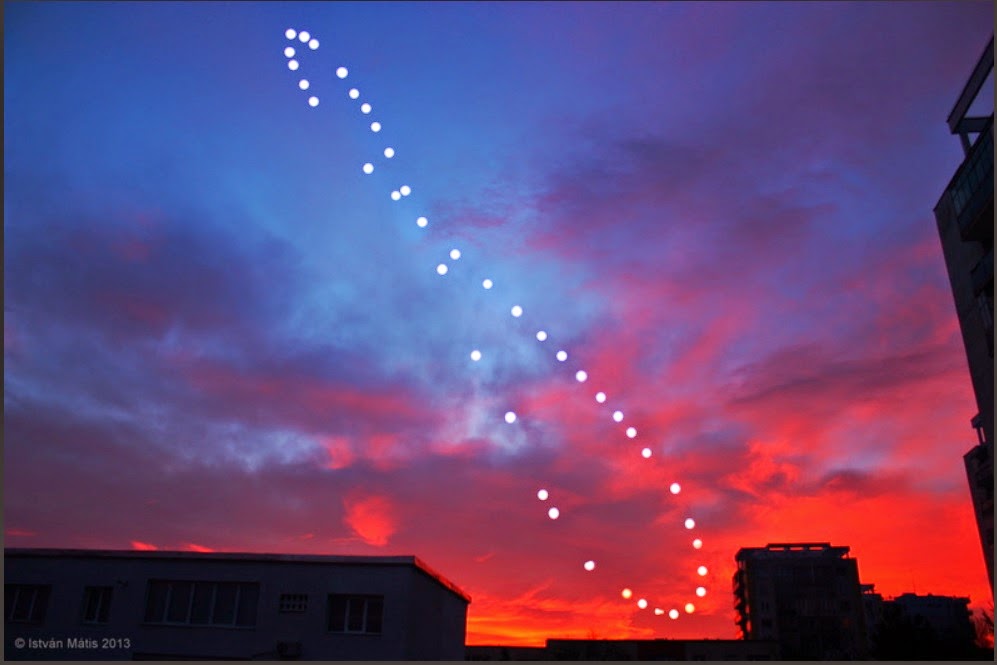 This one was taken by István Mátis from a window in his apartment in Romania (much larger version is here).  He writes,

More details here.  My guess is that the gaps in the pattern were caused by cloudy days.