As a guy who grew up in south Miami around the time of the first mass exodus of anyone who could get out of Cuba, as well as many other escapes, I have a different perspective on the administration opening diplomatic relations with the tin horn dictator than I'm seeing in a lot of places.  I've personally known people who risked their lives and came across the Florida Straits to get away from that "socialist paradise".  In my opinion we give up everything and the Cuban people get nothing.

The most laughable idea of all is that we'll allow Cubans to see what life is like outside their island prison.  As if there's no flow of information into Cuba at all.  Even back in the '60s, friends would mail care packages back to Cuba with supplies they couldn't get there: everything from over the counter, common drugs to clothes like Levis.  Yes, lots of it was stolen by regime officials, but some got through.  Lots of Cubans heard what life was like in this country from family.  But there's an even more direct avenue that I haven't heard anyone say one a word of:  in Cuba, Florida AM broadcast radio pounds into their radios - especially at night.  In the 60s, WGBS, ABC radio on 710 kHz was a clear channel 50,000 Watt blowtorch audible for over a thousand miles.  Today that station is WAQI, (roughly Spanish for Aqui, or "here") broadcasting in Spanish, to south Florida and south over Cuba.  And it's not just them.  On any evening, but especially winter when the daily thunderstorms become less frequent, AM broadcasters from all over the US, Central and South America can be heard there.  How do you think Sears, Walmart, or drug store ads sound to someone in an impoverished nation?  A little tempting?

The next most laughable idea is that "Castro is old.  He'll die soon and it will liberalize".  What makes you think that the power struggles to determine the next dictator haven't already happened?  What makes you think that someone else doesn't want to be "Glorious Leader" over the country so that they can be the ones to skim all the revenue for themselves, and exert total power over the long-suffering Cubans?   Do you honestly think that Castro's going to kick the bucket and the reincarnation of Thomas Jefferson is going to show up and make the island a free market paradise?

That tourism will bring economic boom to the Cubans?  If by that you mean the communist government, then yes, but not the hotel workers and other tourist industry jobs.  They'll get 8% of what the foreign companies spend on the island.  The Cubans will release political prisoners?  True, Raul Castro promised that yesterday, but he promised the same 53 prisoners would be released four years ago.  I wonder how many more times their release will be promised?  Say, I wonder if Cuba will release that cop killer - you know, former Black Panther and Black Liberation Army member Assata Shakur, also known as Joanne Chesimard - who fled to the island to escape the US?

It's interesting that both Obama and Castro referred to Colonialism, as if the US has ever had any interest in colonizing the island.  (Here's a hint: if we had wanted to, it would be a colony now).  No, this is just a hideous deal.  The Cuban government is giving up nothing.  We're giving up everything.  In the name of "change", changing a 53 year old policy for the sake of changing it, the Cuban people get no promises of free speech, no promises of due process, nothing except 8% of what they might get paid to work in a foreign run hotel.


Today, injustice has been rewarded and tyranny has been rewarded. Today, the United States has placed a true embargo on the hope, the rights, and the liberties of a nation by rewarding the executioners and condemning their victims. It is amazing that the embargo the United States placed on a tyranny in 1961, is today, December 17, 2014, lifting it off that tyranny and placing it upon that tyranny's victims. 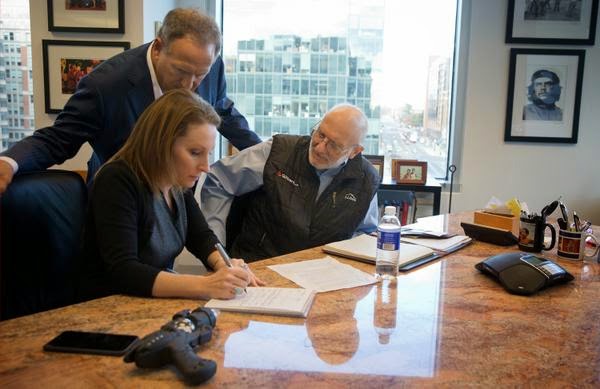 Freed US hostage Alan Gross with his lawyer.  Note the photograph on the wall of Che' Guevara.

It may well be that the often-stated premise is true; that our embargo hasn't done anything to bring freedom to the Cuban people.  Neither will this. You can bet on it.