Why Jonathon Gruber Doesn't Bother Me

Jonathon Gruber is having his 15 minutes of ... I'll say infamy instead of fame.  Gruber, of course is that MIT economist caught on video a half dozen times calling the American public "stupid" and bragging that underhanded techniques, outright deception, or simple non-transparency were essential to pass Obamacare.

Gruber's crime, if there is one, is honesty, or as it's called in politics, a Kinsley gaffe.  The ruling class clearly thinks that the public is stupid, and to be honest, the way many people vote supports that.  In the case of Obamacare, the only people who actually voted it for it were legislators, and since not one "stupid" party member voted for it, that means the stupid voters were ... 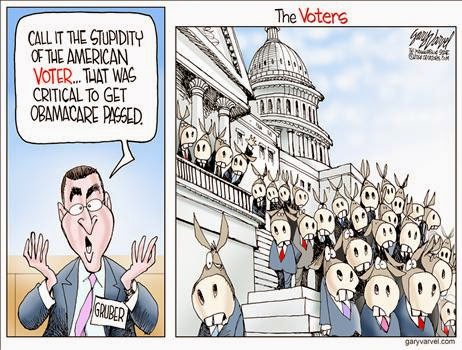 Gruber's honesty doesn't bother me, it's the utter and complete dishonesty of the politicians who hired him: Obama and his staff.  Gruber's just a hired gun doing what he was hired to do.  Nobody is ever going to be shocked to hear that politicians lie, right?  That implies that the outrage flowing around now is just for show; the usual, "it's alright if our people _______, it's unforgivable if their people do the exact same thing."  I don't approve of any politicians lying and the absolute worst case is the "we had to lie to pass it because we know what's best for you better than you do".  After all, they're the philosopher kings that are our betters in every way.


Just like, people… lack of transparency is a huge political advantage. And basically — you know, call it the stupidity of the American voter or whatever — but basically that was really, really critical to getting the thing to pass. And you know, it’s the second best argument. Look, I wish Mark was right, we could make it all transparent, but I’d rather have this law than not.  - Jonathon Gruber, Ph. D. [Bold added - SiG]

Dishonesty is required of liberal politicians.  As Rich Lowry of National Review Online put it:


Complexity is a staple of liberal policy making. It is a product of its scale and reach, but also of the imperative to hide the ball. Taxing and spending and redistributive schemes tend to be unpopular, so clever ways have to be found to deny that they are happening. This is what Gruber was getting at. One reason Obamacare was so convoluted is that its supporters didn’t want to straightforwardly admit how much the law was raising taxes and using the young and healthy to subsidize everyone else.

Gruber, though, is the gift that keeps on giving.  His latest gaffe is to honestly say that he believes in eugenics as Margaret Sanger did.  Much as Sanger wanted to eliminate inferior races, he believes that abortion is a public good because it eliminates "marginal children".  The economic link in the book Freakonomics that seemed the most tenuous to me was the assertion that abortion was responsible for a decrease in crime in the '90s.  It seems that Gruber is the originator of that idea and it was just picked up by Steven Levitt, one of the authors of Freakonomics.

CNS News reports that apparently Gruber only doesn't like American minority babies, because of a strong link tying Gruber to the current effort to provide ACA health benefits to illegal immigrants.  If you're an American minority baby, off to the suction machine with you, but if you're from Central America, come right in!

There is the American academic liberal left in all its glory.  Lie to your face to get social engineering bills passed.  Kill off American babies from undesirable backgrounds.  Invite matching populations from other countries in.  Gruber isn't the problem.  He's the rare idiot who will tell you that he lied to you.  The problem is the people who hire him to lie.