In a headline that sounds like the science fiction of 10 years ago, it was reported last week that biotech company Organovo has started selling 3D printed liver tissue.  They are the first company known to be commercially selling 3D printed tissues.

“The liver tissue is constructed from three human liver cell types; hepatocytes, hepatic stellate, and endothelial cells in an organized structure with the cell density and tight junctions of that found in native tissue. Our tissue is designed to replicate the composition and architecture of human liver tissue using these major cell types.”

This is an interesting landmark in the advancement of tissue engineering.  The product itself is a 3D structure of liver tissue, intended for drug testing and other testing uses outside the body, such as for chemical toxicity.  Historically, testing like this is referred to as "in vitro", or in glass testing, named for the glass labware tissue cultures were grown in; contrasted with "in vivo",  or in a living organism.  Rather than test in a way that can harm someone (which is unethical), or extrapolate from a monocellular layer in a Petri dish, this is a liver that is going to give more direct answers with no ethical issues.
Years ago, a surgeon explained to me that liver tissue wasn't very highly structured inside, and that a liver transplant can be done by taking a portion of one person's liver and implanting it in the recipient.  If the vascularization takes place, the portion of liver can grow and take over the rest of available space.  In contrast, something like a kidney is considerably more complex with distinct layers and structures with different functions.  Organovo is aiming at the more complex organs.  While this is a 3D printed tissue, don't make the mistake of thinking that this is anything but a real human liver, "architecturally correct", as they call it.  In this photo, they show the common structure of (left to right) liver, blood vessel, and breast. 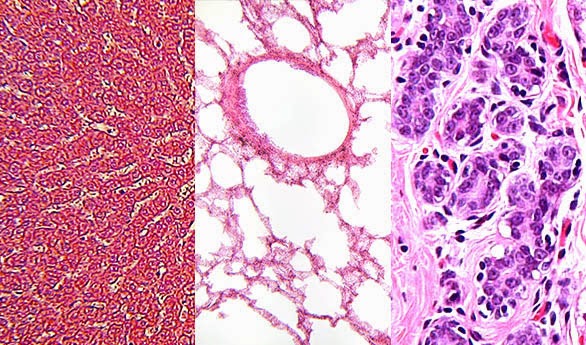 While this is intended for testing toxicity, I have to think the Holy Grail here is to print histologically compatible, real human tissue for transplantation.  The Liver Foundation says that over 1500 people die every year while waiting for a transplant; around 200,000 heart bypass surgeries are done every year, a market for commercially produced blood vessels; and approximately 100,000 breast reconstructions are done every year after removal due to cancer.   All of these are candidates for a 3D printed replacement.  I couldn't begin to guess how far out in the future that application might be.