Anthony Watts at Watts Up With That does it again, with an expose' on one of the newest climate alarmism buzz-phrases, "Ocean acidification".   Ocean acidification will make sense to someone with high school science background.  Remember that carbon dioxide mixed with water forms carbonic acid?  (also known as club soda, seltzer water, unflavored soda and other colloquialisms)  So if there's more CO2 in the air, and it mixes with the ocean, then the ocean should become more acidic.  It's so obvious that the typical thermaggedon believer will just believe it's happening without questioning.  Oh noes!! The ocean is turning acid, we're all going to die!!!

Sure enough, it has started showing up in congressional dog-and-pony shows.  Chief alarmist appears to be a Dr.  Richard A. Feely, who is a senior scientist with the Pacific Marine Environmental Laboratory (PMEL)—which is part of the National Oceanic and Atmospheric Administration (NOAA). Feely’s climate-crisis views are widely used to support the narrative.

There's only one problem.   An honest Ph. D. student started to wonder what's going on.   Ironically enough, the honest student is named Mike Wallace, no relation.


Mike Wallace is a hydrologist with nearly 30 years’ experience, who is now working on his Ph.D. in nanogeosciences at the University of New Mexico. In the course of his studies, he uncovered a startling data omission that he told me: “eclipses even the so-called climategate event.” Feely’s work is based on computer models that don’t line up with real-world data—which Feely acknowledged in email communications with Wallace (which I have read). And, as Wallace determined, there is real world data. Feely, and his coauthor Dr. Christopher L. Sabine, PMEL Director, omitted 80 years of data, which incorporate more than 2 million records of ocean pH levels.

Feely’s chart, first mentioned, begins in 1988—which is surprising as instrumental ocean pH data has been measured for more than 100 years since the invention of the glass electrode pH (GEPH) meter. As a hydrologist, Wallace was aware of GEPH’s history and found it odd that the Feely/Sabine work omitted it. He went to the source. The NOAA paper with the chart beginning in 1850 lists Dave Bard, with Pew Charitable Trust, as the contact.  [Emphasis added - SiG]

As is virtually always the case, when the data isn't cherry picked by a corrupt scientist (my words, not Wallace's or Watts') the problem goes away.  Freely seemingly simply threw out data points that didn't make his graph the way he wanted it.  The pink descending line (lowering pH - or more acidic) is Feely's, the blue line is the true series; the ocean is becoming less acidic. 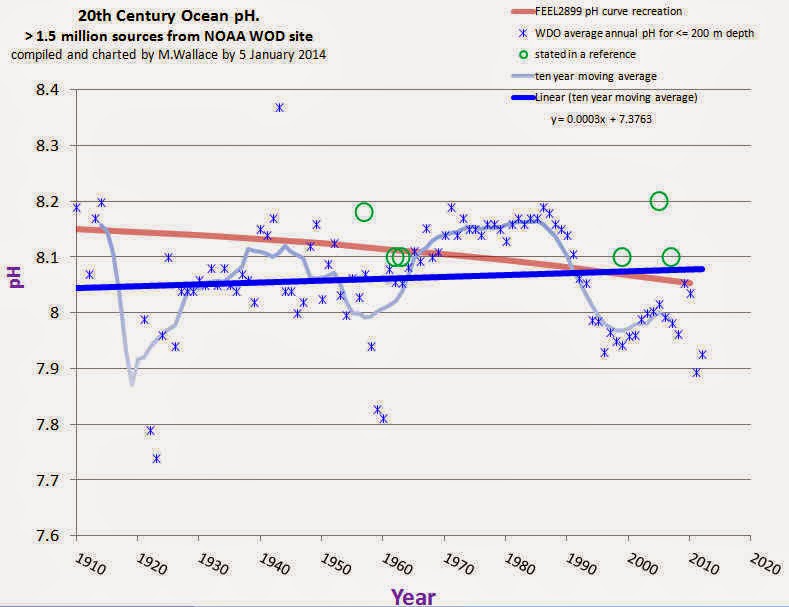 Wallace, the honest Ph.D. student, has the great quote to conclude this little story of NOAA fraud with:


“In whose professional world,” Wallace asks, “is it acceptable to omit the majority of the data and also to not disclose the omission to any other soul or Congressional body?”  [emphasis in original - SiG]

A great quote, one which we unfortunately all can answer, but here at Graybeard labs we've found exclusive artist's renderings of the peer review process used throughout climate science: