The European Pinata is About to Split Open

Over a year ago, I reported about a paper from giant French bank Societe Generale,  that said their customers should prepare for global economic collapse.  I don't expect you to remember that, but I point this out because they were downgraded by Moody's Friday, along with BNP Paribas, and Credit Agricole, three of the biggest banks in France. Interestingly, Moody's said they took into account that these banks will probably receive "state support" (read that as "bail out with taxpayer money") if the situation worsens.  I assume that means their situation is worse than the rating they were given, and without the prospect of free money, these banks would have been knocked down even more.

If you look around, the signs of imminent collapse are everywhere.  The Telegraph is reporting that the whole Eurozone banking system in on the verge of collapse.  You've seen mention of the runs on banks in Greece, right?  Eurozone companies are closing - either going out of business outright, or moving offices into Germany and the few places with half a chance of surviving.  Just a week ago Tuesday, I reported on an article that the UK foreign office was contingency planning how to get expats out of European countries and home, after the collapse.

You know, the whole MF Global thing in last night's post is an important part of the collapse, too.  When Ann Barnhardt did her famous "going Galt" post, she talked at length about how the destruction of MF Global is not just screwing over customers and stealing their money, but destroying faith in free markets.  Stock, commodity and other markets can't operate in a corrupt system - that's one reason there was never a giant Moscow stock exchange.  They require faith in fair rules and a stable system.

A side effect of MF Global is the destruction of the markets that are propping up what's left of the EU.  The world economies are highly linked - you know you and I are paying for EU bailouts with our tax money through the IMF. It's not a conspiracy theory that the system was built as cold war Mutually Assured Economic Destruction.  The EU does not go down without taking us with them.

Bottom line: the collapse of the Euro can not be stopped. This will lead to, at a minimum, a severe recession in this country, although I think that's optimistic and the chance of US economic collapse is very high - we're not exactly a wealthy nation, you know.  I mentioned the GBTV interview with Jim Rogers that supports this belief before, and it's worth watching.  Apparently, non-members can view the video because others have linked to it as well.  It's in several segments, and I don't know that they're all viewable, but watch what you can.

Just Tuesday, I noted that while driving home, I heard Stuart Varney opine that this Friday (yesterday), they would pass some sort of financial austerity, and by Monday the streets of the European capitals would be burning.  Well, Friday there was an agreement of sorts - an agreement to plan to make a plan.  The DJIA reacted with a pop of 187 points.  On Monday, we'll find if Varney got it all right and the streets of Europe are on fire. 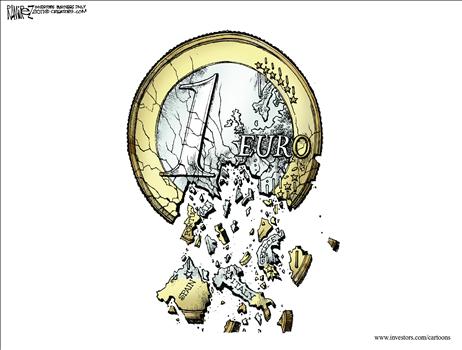