It's Not Just the NDAA - It's Happening Now

There's a lot of talk about the current National Defense Authorization Act of 2011, NDAA, currently in House/Senate reconciliation.  This is the bill that gives the administration the authority to use the Military to arrest and indefinitely detain American citizens on American soil.  Retired US Marine 4-Star Generals Charles Krulak and Joseph Hoar wrote an opinion piece for the New York Times urging the president to veto this bill.

With one small difference - use of the regular military - it's here now.  Arctic Patriot wrote in "It Can't Happen Here" about a friend of a friend who has been arrested in an armed SWAT raid in front of his children, and wife, while staying at AP's friend's house.  This man is being held in prison with no charges and no arrest and no prospect of release.  AP's link is to Patriot's Lament, who writes "It Won't Happen in America - Yeah, Well It Just Did" (on Dec 6):


I have 8 children, all of them watching the scene unfold before their eyes. Dozens of agents wearing body armor and carrying machine guns, swarm around our house.
I think over my options, (there is only one, they kill kids) and I walk to the door, and yell loud enough for the thugs outside and my family inside to hear, "It's the FBI , don't be scared, just be quiet and sit down!" I open the door and am looking at Michael Anderson's wife. They have her in front of them, between us, and she is crying.

The last update to the story was this past Monday:


Michael had his hearing today, a week after his arrest. Still no charges. He was not released and no bail was allowed. He will be flown to Anchorage in cuffs and made to testify at a grand jury. He was promised, (insert very loud laughing here) that he will be released afterwards and will be free to go.

I don't see a whole lot of difference between being held without charges in a prison in Anchorage than in a prison in Gitmo.  It's a chilling story, especially in the context of the NDAA containing wording that says if you have more than a seven days worth of food, or some amount of "weather proof" ammunition, you might be considered a terrorist, taken away and held without access to any legal way out. 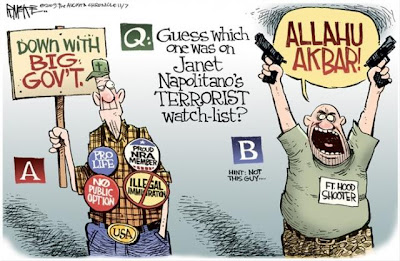