OK, now I'm jealous of the folks living in Australia.  Folks in the southern hemisphere are being treated to a sunrise display of a major comet, Comet Lovejoy.  These pictures from the Andes will give you an idea of what it's like on these early summer mornings for observers in dark locations. 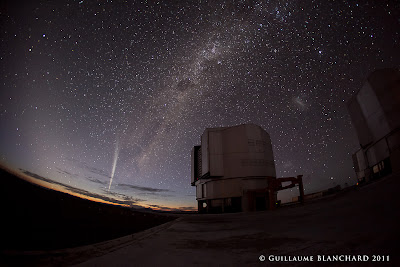 Comet Lovejoy is unusual in a couple of ways - besides being a bright, naked eye comet.  First, it was discovered by an amateur astronomer: Terry Lovejoy (who describes his discovery here).  While comets were often discovered by amateurs patiently searching the sky every night, the advent of satellites to automate the search has meant that most comets are now discovered by robots.  Second, Comet Lovejoy survived a close brush with the sun.  The space geeks who keep up with Soho, the solar observing satellites, have seen dozens of comets crash into the sun, and it is a remarkable comet that survives the encounter.

As far as I can tell, the northern hemisphere will completely miss this comet.

I first got interested in astronomy as 7th grader, and played in the evenings with a small refractor, eventually getting a 4" reflector.  I learned I had just missed what many consider the best comet of the 20th century, Ikeya-Seki in 1965, a comet so bright, it could be seen in broad daylight if you masked the sun with your hand!  Some years later, a major comet became visible in late 1969 and into 1970.  Comet Bennett was visible in the mornings before school, and it was a companion every clear morning throughout the winter and into spring.  More history here.