Busy day today and a busy weekend.  Today we washed and waxed the cars, cleaned them inside and out.  A big job, that has always left me with body soreness for a few days, regardless of how much I was working out before doing it. Yesterday, I replaced some missing boards in the fence, reinforced some areas that will need replacement within a year or two, and replaced an old smoke detector that no longer detected.  (You do know that's how the Chinese get rid of their nuclear waste, right?  In the slightly radioactive smoke detectors.  Just sayin'...)  I also spent a little time with this new toy. 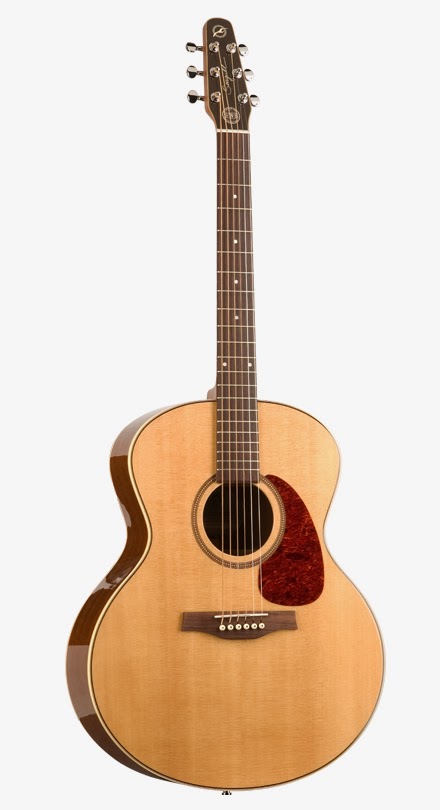 Pictured is a Seagull acoustic guitar, somewhat awkwardly named the Mini Jumbo.  Long time readers around here know that I've been studying guitar since about 2010, (returned to it after a long time away) completing one course and moving into a "Guitar 201" class in blues.  The Yamaha acoustic I've been playing is a nice instrument, but like most in its price class has a plywood body.  The only solid wood is the top - the sounding board.  It has a really nice tone, but guitarists talk in glowing terms about solid wood acoustic guitars.

About a year ago, I started casting furtive looks at solid wood guitars.  Unless you want to get into well-over-one-thousand dollar instruments, there are only a few available and they all tend to cluster around the $800 range.  That's $800 after the pretty uniform discount from MSRP you'll find in the music e-tailers.  There are the Epiphone Masterbilt series, some made by Blueridge Guitars, some made by Yamaha (A Series) and this one: the Maritime SWS - Solid Wood Series - made by Seagull, a Canadian company.  This guitar has a solid mahogany body, a solid spruce top, and a mahogany neck topped with rosewood.

Last Saturday, the first after New Years, I was minding my own business when I got an email from Musician's Friend, one of the e-tailers I've bought from.  The special sale included deep cuts on used instruments in stock.  This guitar was rated in their second tier, not the "mint condition" but "gently used", and was available for half of its normal price.  At half price, it came in well under the price of my Yamaha.  As always, I thought about it long and hard, even giving myself an enforced few hours of not looking at it.  In the end, I bought it and it was here Wednesday.

I was shocked at how new it looked.  The only thing they documented as being wrong with it were some marks on the headstock and those are so minor I had to look hard to find them.  The only thing I didn't like were the factory issue strings, so I put a new set of Ernie Ball Slinkies on it yesterday.  It now feels great and sounds great.  It does sound different from the Yamaha.  I don't have words for the difference, but to me it's quite noticeable, and I don't think I have the most well-developed hearing in the world.  (I told a friend, "I've got tin ears"... he looked at me and said, "I only see two.  Where you keep the other eight?!")