Design News reports this week that MIT Professor Angela Belcher genetically modified a common virus to manufacture nanoscale electrodes for a battery, giving two to three times the energy density of the currently known ways to create those electrodes.


To develop the battery, Belcher and fellow researchers produced a nanowire array, with each wires about 80 nanometers across, using a genetically modified virus called M13. The viruses created manganese oxide, which is often a material used for lithium-air battery cathodes. However, unlike the wires that have been developed through typical chemical methods for lithium-air batteries, the wires built by the virus have a rough, spiky surface, which increases their surface area, according to researchers.

This increase in surface area can provide an advantage not only for the rate of charging and discharging, but also in creating a more eco-friendly fabrication process for the battery design, Belcher said. This is because the process of developing the virus-based battery can be done at room temperature using a water-based process rather than needing a high-temperature process and hazardous chemicals, like conventional battery-fabrication methods.

There will probably be people who read about this and immediately get concerned about the viruses being contagious to humans, but these are not human pathogens and the genetic engineering modifications move them even farther from the narrow environment that humans represent. M13 is a bacteriophage - the word literally translates as "bacteria eater" - a type of virus that infects bacteria.  There are many types of bacteriophage and they're relatively easy to culture in the lab.  Disease causing pathogenic viruses, like pathogenic bacteria, tend to grow in more restrictive conditions and are harder to culture, being called "fastidious".  For example, they may need to grow in eggs or cultured dishes of cells with blood and oxygenated fluids.

As with the vast majority of advances, this isn't an overnight discovery.  MIT Technology Review reports she published some original work in 2009, and has been working in this general direction since about 1997.


One of the most thrilling moments in Angela Belcher’s professional life came during a routine visit to the lab in the winter of 2009. Two of her graduate students in MIT’s Department of Materials Science and Engineering were trying to harness biological tools to make materials for a battery electrode. They showed her a petri dish holding a virus they had engineered to bind to materials that it normally wouldn’t have any affinity for—iron phosphate and carbon nanotubes. The virus had neatly assembled the two materials into tiny wires, which would turn out to perform as well as the electrodes in commercial lithium-ion batteries. 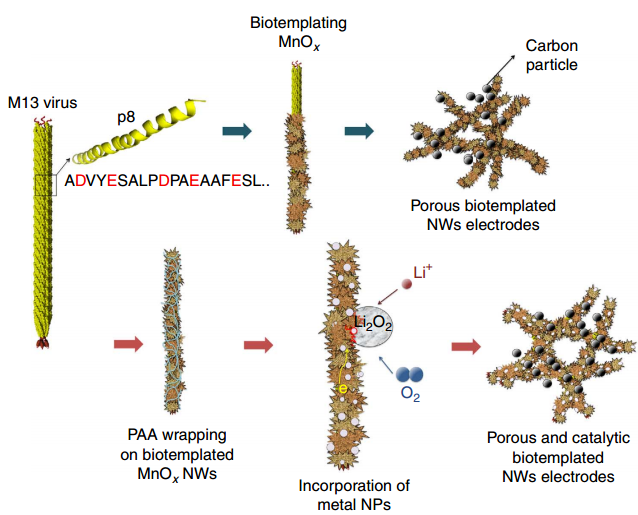 The way I see this, it's making viruses into something like an ox, a horse, or the other animals that humans have used to help with labor for all of history.  We're having viruses make the electrodes for the batteries.  In a similar way, we also use yeasts as industrial workers for us, making wine, beer and breads.  As we use bacteria in making yogurt, cheeses and other things.