In the current issue of advertising emails from semiconductor manufacturer NXP (the current iteration of a very established, even storied company - Philips) they make reference to a new breed of RF heating devices they're developing the technology for.  In this video, they show a fish cooked in an RF oven while embedded in a block of ice.


Other potential uses include industrial applications such as ovens and furnaces e.g. for drying materials such as ceramics or wood. In medical applications it’s opening up new possibilities such as the safe rapid defrosting of human organs and blood or hyperthermia therapy for cancer treatment. All these require a very high degree of temperature control, achieved via coordinated RF energy irradiation from one or several channels.

Another key area for RF energy is the excitation of plasmas. Innovative RF plasma lamps can deliver unbelievably bright light at 140 lumens per watt, or RF energy can fire a gas discharge to drive powerful industrial laser cutting tools. Then there is the RF spark-plug for automotive ignition systems, which can provide significant savings in fuel consumption and CO2 emissions.

Today's microwave ovens are not substantially different from the ones that came out in the late 1960s.  A microwave power amplifier device (almost always a vacuum tube called a Magnetron or "Maggie") generates hundreds of watts of power at around 2500 MHz and dumps it into a box where the food sits.  I know a lot of people think 2500 was chosen because it was a "resonant frequency" for water and cookware doesn't have water, but it's not resonance.  This is just dielectric heating caused by the polar molecules moving in response to the energy dumped into them and 2500 MHz was chosen because it was in the ISM (Industrial, Scientific and Medical uses) frequency band allocated by the FCC.  Any frequency in that part of the spectrum would be just as good.

To be able to cook the fish in a block of ice and not melt the ice (much - the hot fish will melt some of it) shows very precise control of where the strongest fields are, and I assume it's being done with power beams formed by antennas.  NXP makes power transistors and a showcase for their products would be a number of amplifiers (16?  speculating here) each driving a separate antenna and the beam being shaped by changing the phase - the exact timing, down to the picosecond - of the RF signal between the individual antennas.  This is a phased array antenna system in the oven.

The same technology could be used for other things depicted in that video - hyperthermic treatment for cancers, flash thawing of blood and frozen organs for transplants without overheating parts of the target.  Lots of power with pinpoint control.  Sounds like a great solution. 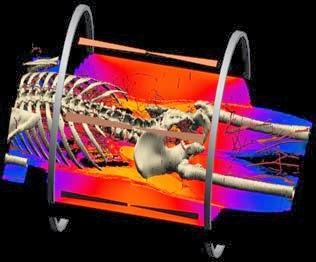 (Electromagnetic simulation of the temperature gradients induced during treatment.  Specific absorption rate of different tissues creates temperature differences, too - a field being intensely studied.  The temperatures being targeted are not very high - 43C or 109F.  A very specifically targeted fever.  If the affected part were a hand or foot, you wouldn't think twice about going to 120, unless it was very raw tissue, right?)