I know that engineering plastics have found their way into previously unexpected places, but the intake manifold on a car engine?


New Ford Duratec 3.5-liter and 3.7-liter V6 engines will be equipped with an injection-molded cross-over coolant component made of Zytel HTN, replacing the previous overmolded brazed metal tubing, a DuPont spokesperson told Design News. The component allows engine coolant to bypass the manifold as it circulates through the engine.

The combination saves 1 pound in weight and $1 in cost per engine, and while those numbers seem small, multiply them by the number of engines they make, and assume it's pure bottom line profit for Ford.  It's possible the innovation saves them more in other ways: perhaps some "fleet use of plastics" requirement from our insect overlords in the fed.gov, or perhaps saving some time in the assembly.  The innovation led to the design team, a collaboration among DuPont, Ford, and Illinois Tool Works, being named team finalists for the Most Innovative Use of Plastics Award, Process/Assembly/Enabling Technology category, of the SPE's 2013 Automotive Innovation Awards (pdf warning). (SPE = the Society of Plastics Engineers) 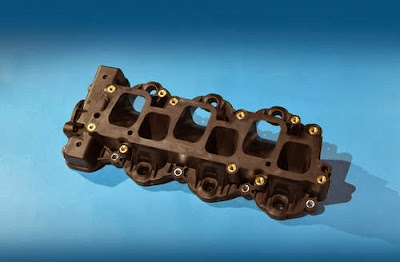 In truth, despite some failures that make you wonder WTF they were thinking, like Mercedes' use of biodegradable plastics in engine wiring harness insulation, plastics have been encroaching into the engine compartment for quite a while now (that Mercedes story is from a 1995 car!).  DuPont and ElringKlinger made two injection-molded oil pans for large, heavy-duty truck engines manufactured by Mercedes-Benz from Zytel HTN. Zytel HTN has also appeared in the in-wheel motor bobbins of the SIM-WIL EV from Kawasaki, Japan-based SIM-Drive Corp..  These, especially the oil pans, appear to be successes.

But commenters say Ford has done this experiment before.  Mid-90s Fords had plastic intake manifolds with fins in them to help swirl the fuel-air mixture, but the fins would break off and get sucked into the cylinders.  They had a plastic intake manifold on '96 to 2000 V8s, and those had a tendency to catastrophically split, dumping the coolant on the engine and into the alternator.  This caused damage to the alternator and led to engine overheating.  Ford ended up buying a lot of those after the warranty expired.

The engine compartment is a rough environment.  It's not climate conditioned in any way, so when the car is started, it can be any temperature where a car might be parked, from well over 100F in a Florida summer parking lot, to -40F or lower last week in Minnesota.  Once the car is running, thermal stresses can be severe until operating temperature is reached, and that's always above the normal boiling point of water.  Then there's vibration, which is present on the best of roads.

So here's my view:  Ford, I'll gladly pay you $1 more for a metal intake manifold that won't come apart.  Go put a few million miles on those Zytel HTN parts - not just 100,000 miles on 100 cars, have a sample of cars that go half a million miles - and get back to me with how they compare to cast metal.