The Curious Case of the German Gold

Late in 2012, Germany made an unprecedented request of the US Federal Reserve Bank.  Germany, like most of the world, had stored as much as 50% of its gold in the US Fed's vaults as part of the agreements turning the USD into the world's reserve currency.  They wanted the Fed to return their gold, for storage in their country.  The idea was that Germany's gold was held as if in a safe deposit box; like a safe deposit box, the owner has every reason to expect if they want to empty the box, they can.

In a stunning move, the Fed refused, originally refusing Germany the right to inspect their gold, and finally offering to return the gold in installments, eventually completing the transfer by 2020.


The German government then asked to visit the FED vaults to inventory the gold and determine its actual existence, but the FED refused to permit Germany to examine its own gold. The reasons given were “security” and “no room for visitors”. And nothing else.

Germany did finally send some staff to the FED, and they were permitted only into the vault’s anteroom where they were shown 5 or 6 gold bars as representative of their holdings, and were permitted nothing else.

In the early days of 2013, the German Bundesbank announced that it intended to repatriate Germany's gold reserves. That would mean moving 300 tons of gold from New York to Frankfurt in 8 years, or roughly 37.5 tons per year.  In December, the Fed delivered 37 tons of gold to Germany as requested.  Here it goes from peculiar to outright weird.   I quote some exchanges from Germany as reported on GATA, the Gold Anti-Trust Action Committee's website.  You should read the whole thing:

I am an independent financial journalist.

In connection with the transfer of 37 tons of Bundesbank gold from New York to Germany, I came across the news that the bars were a melted before the transfer. May I kindly ask you for the following information:

Why were the bars melted at all? And why couldn't that wait until the bars arrived in Frankfurt?

Thank you for your enquiry.

At a press conference on the topic of Germany's gold reserves on 16 January 2013, Executive Board member Carl-Ludwig Thiele presented the Deutsche Bundesbank's new storage concept. In addition to the relocation of gold bars, this concept includes, amongst other things, measures to ensure that the specifications of the London Good Delivery (LGD) standard are met.

In cases where these specifications were not already met, the Bundesbank had these original gold bars melted down and recast in order to meet this standard. This was achieved without any difficulties.
.....
Statement by Peter Boehringer, president of German Precious Metal Society and co-initiator of the Repatriate our Gold campaign --

The public is still waiting for answers to crucial questions like these:


There is more at the GATA link, but the whole episode has the air of some sort of deliberate obfuscation going on.  Why would the Fed not allow the Germans to even see their gold, and then let them "look but don't touch" at a few bars?  Why doesn't the Fed give Germany everything now, and not over eight years?  Why would the Germans agree to not getting their gold all at once, but rather wait until 2020?  Why would the bars be melted down?  I looked up the London Good Delivery standards and there's nothing about it that seems to require refinement, so recasting them seems unnecessary.

The often-cited allegation is that there is nowhere near as much gold in the central bank vaults as they claim to have, and Fort Knox is empty.  In this view, central banks keep reselling each other the same few bars of gold in a never ending pyramid or Ponzi scheme creating a "money bubble".  It would be the last bubble before everything collapses, and this Bundesbank/Fed behavior is giving credibility to those stories. 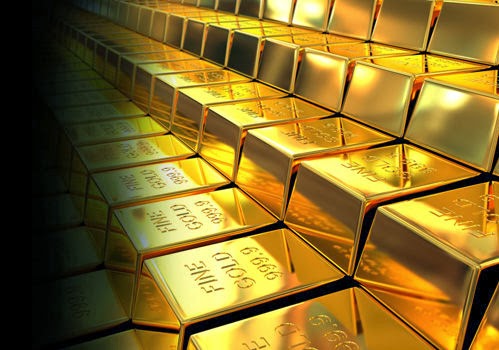