"May You Live in Interesting Times"

For all my life I've heard that saying is a Chinese curse.  Not knowing any Chinese, I couldn't tell you for sure, but we sure live in interesting times, don't we?

The DJIA is down about 5 1/2% from the start of the year, but bear in mind there was a real run up to the end of the year, as you can see in this chart.  The DJIA is really about where it was in mid November, around two and a half months ago.  In terms of purchasing power, it's where it was around 1996. 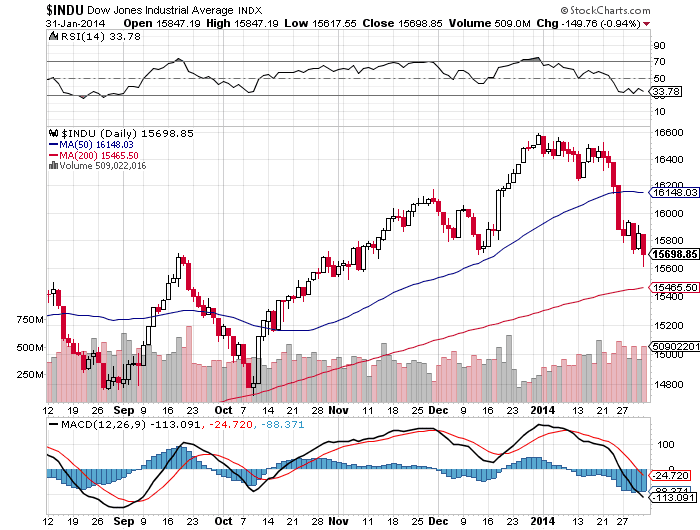 The question, as always, is where do we go now?  Was this just a mild correction, blowing off some steam from the holiday run up, or is it the start of something much bigger and deeper?

I subscribe to two economics/finance newsletters, Bill Bonner's free newsletter and the Stocktiming.com letter.  Stocktiming is essentially pure technical analysis: plots of dozens of things, updated on a regular basis, and comes out weekdays.  The letter doesn't push any particular agenda - other than getting you to subscribe to their paid version - and is a Dragnet-style "just the facts" approach.  Bill Bonner's "Diary of A Rogue Economist" has more of a philosophical air to it and he's more like a Peter Schiff/Ron Paul and other "sound money" economist.  His comes out on most weekdays, but will skip some.

The point of the previous paragraph is to point out how two authors in the financial realm can approach the analysis from decidedly different view points, yet they both have been singing the same tune.  Get Out of the Stock Market.  Bad Things Are Coming.

Yesterday's stocktiming newsletter was completely unique.  I've been getting it for a lot of years, maybe since the mid '00s, and he has never said what he said this time (copied in red to make it look as much like his email as I can):

The Risk levels are very high and the market is sitting on the edge, and I am not sure the Fed can pull off a save.   If you weren't around in 1987, this is about as close as you can come to a possible crashing environment ... a spectacular crash is even possible ... IF the Fed. doesn't get this one right. This is the WRONG time for them to pull back on money injections. The BIG IF here centers around what the Fed can do, and actually does ... and nobody knows what that will be.

(The remark about 3 sells is from a setup of three complex decision matrices he maintains).  This alert is from the staid, quiet, technical analyst.  Bonner, for his part, has been saying the market run up is entirely fueled by the Fed's QE to infinity, and it's going to correct.  That's not unique to Bonner, dozens of honest commentators are saying this and if you come here regularly, you'll know I've been saying this, too.  Bonner says the Fed is going to continue with the taper for a while but ultimately will have to resume QE.  The test will be as the market continues to contract.


The Fed will continue attending its Counterfeiters Anonymous meetings – until the market really cracks. Then it will roll up its sleeves and get out the paper and ink. Janet Yellen will not want to preside over a crashing market any more than Ben Bernanke did.

Yes, the Fed has broken the US economy and its markets. Now, it owns them. It can no longer permit the stock market (and bond market, for that matter) to do what comes naturally to them – correct their mistakes.

And that means the mistakes will get worse.

Analyst Toby Connor of GoldScents says the scariest chart in the world is the S&P 500.  When this bubble goes, it's going to make 2008 look good, and it's coming soon.  He presents this chart going back to 1996; that means it shows the bubbles in the late '90s and the mid '00s. Note how much higher the price is than both of the previous bubbles.  It has been said the current bubble, which he describes as the "currencies and sovereign debt bubble" is going to be the final bubble.  After this, no one will ever trust a central bank again. 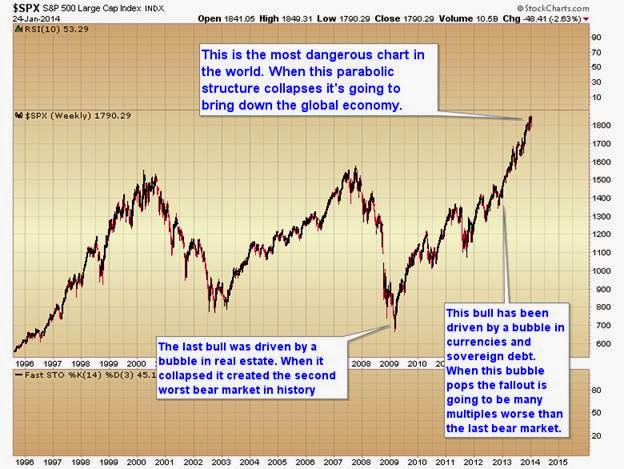 Yesterday, Bayou Renaissance Man ran a piece summing up conditions and wondering if we have reached the tipping point.  With the recent problems in emerging markets, the banks limiting cash withdrawals, the major international financial groups (IMF, World Bank...) arguing for confiscating portions of taxing your savings and other goings on, I'd say to prepare for a rough year.  To use the sailing analogy, batten down the hatches and prepare for rough weather.  Prepare for water breaking over the deck.  Put on your PFD and prepare to end up in the water.