I've decided I need to make a dedicated reloading area, so I'm looking for some advice on setting up a really nice reloading area.  I have two presses, a single stage and a progressive: I think I'd like to leave both set up at opposite ends of a single bench.  How are you guys set up? Got any links to pictures?

My reloading adventures so far have been in cluttered spaces - to say the least.  I've safely reloaded a few times, with the single stage Rock Chucker Press I started out with, but I've just barely gotten my RCBS progressive set up.  Part of what I've been doing for the last couple of months is cleaning out an area in the garage that will be the new reloading center.  Right now, I store my powder at the opposite end of the house, in compliance with things I've read from the manufacturers and online (example), keeping powders and primers far from each other, and powder bottles separated from each other by barriers, but I don't have a powder cabinet.  That will change.

I've looked at many pictures online, and I have some ideas, I just thought I'd see what those of you who drop by regularly are doing.  To a degree, it's overwhelming.  Way too many choices.  I don't have unlimited room, but I'm aiming for a corner in the garage where I can spread out about.  Maybe 4'x4' to as much as 6'x6'.  Bigger is preferred, of course. 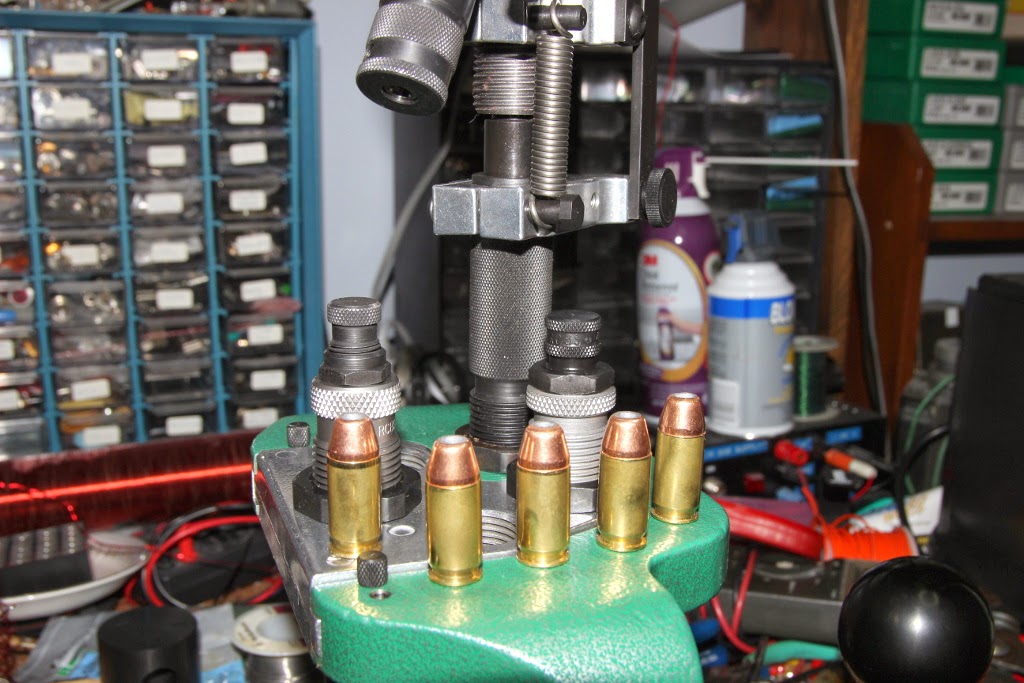 I don't have any real pictures of the clutter, because I've always done my best not to include the clutter in the pictures.  Look behind the press in this picture, though.  This is also my electronics workbench.  To the right is a gray-cased DVM, behind that a black box with blue Dymo labels - that's a 30 year old power supply.  There's freeze spray, dusting spray, and more.  There are two bins full of electronics parts (junk box), another voltmeter on the left, a long coil wound with red magnet wire that was the heart of an experiment.  There's a spool of orange wire on the right, and solder almost under the press.  Just too much junk.  Everyone knows it can not only be distracting during reloading, it can be dangerous.  I need to get that mess straightened out.  It's why I haven't done much reloading.

(Note to non-Floridians:  it's pretty much universal everywhere I've been in the state that your house comes with a garage, and you leave your cars in the driveway.  A Florida garage is more like northerner's basements).