Projects are wrapping up (pun intended).  The MHX fishing rod is done, although it didn't need any more wrapping.  Put on the first coat of epoxy Friday night, the second last night.  It's ready to go fishing - and hopefully last much, much longer than the 15 minutes the first blank lasted.

Worked a lot on the guitar.  The binding had needed cleaning; it was colored by the stains in a lot of places.  That's meticulous work scraping with a single edged razor blade, but I did that yesterday.  The neck and back were re-stained.  It began with my thinking that perhaps dissolving the Transtint dye in alcohol instead of water would bring the grain up less, and instead of re-staining with brown, I first mixed red, and then half red/half the "reddish-brown" from the bottle.  It definitely makes the red more noticeable, so I did the back of the body to make it match better.  You can see the contrast with the side in the original color here.

Took a cardboard box, cut out most of one side, lined it with a towel in attempt to capture overspray, and started spraying it with Minwax semi-gloss polyurethane.  Did two coats on the neck, two on the back and one on the front. 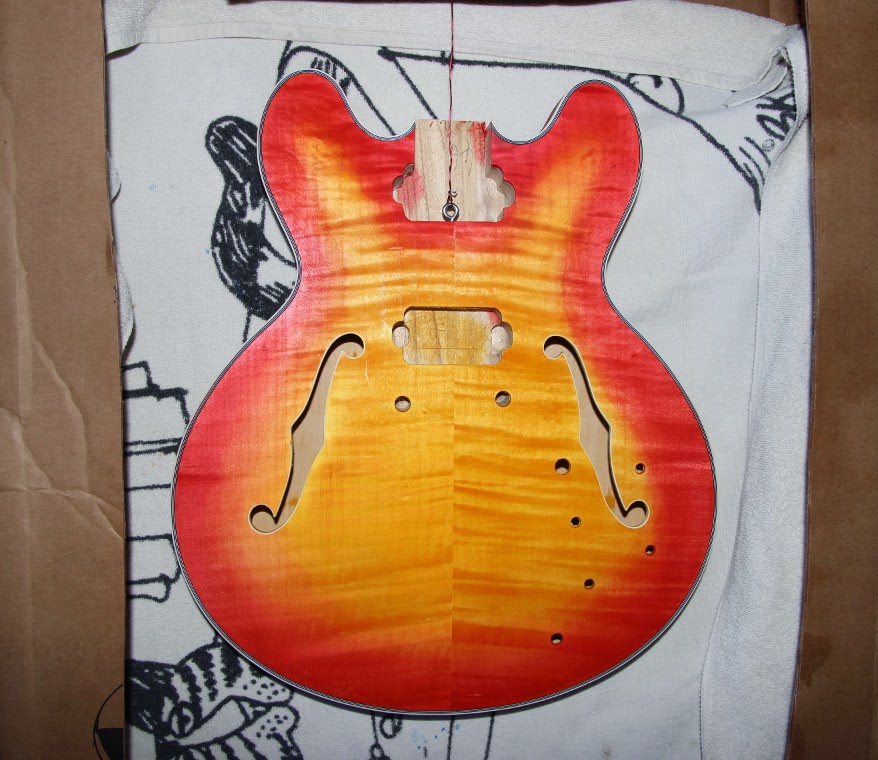 The Minwax instructions say you can spray multiple coats within 2 hours between them, and if you go over that, let it sit 72 hours and then sand before spraying more.  That's the plan: to let it sit until next weekend, sand and start spraying again.

The rest of the weekend was spent in study and planning for some other things I've got going on that needed attention.  And that I can't quite mention yet.