The Market Does What Markets Do - A Better Table Saw Safety

In the past couple of years, I've written a few times about the Saw Stop "flesh sensing" technology and the Fed.Gov's rush to make a previously unavailable safety feature from a boutique manufacturer into mandatory equipment.  A quick summary of the story (from here and here) for new readers follows:


In the beginning of the 2000s, an inventor developed a sensing technology that could potentially make table saws much safer. He shopped his idea to the major tool manufacturers, but it was untested, untried technology.  Saw makers were concerned about rolling it out into their products, as well as how durable it would be.  This is the kind of safety that could be there for 20 years before it gets called on to work, and the liability for it not working could be just as bad as not having it.  Since no tool maker would license the technology, the inventor started his own company: Saw Stop.
...
In 2010, a construction worker won a lawsuit against Ryobi tools' parent company for producing a "dangerous and defective" table saw.  The plaintiff was awarded $1.5 million when he sued for $250,000.  The defect?  It didn't include that option.
...
The problem is the lawsuit was based the existence of Saw Stop's technology, which had only been available on large (cabinet) saws and had never been tried on a jobsite saw like the one in the lawsuit: in other words, Ryobi was punished for not including a safety device that never existed for their product.

Just like guns, the real safety is in the operator's head.  This suit started when that worker had a really bad accident on a table saw.  His work was binding in the saw, so he did something stupid and pushed harder onto it, eventually seriously injuring his hand.  I can see him arguing he has a suit against his employer for insufficient training before having him use a dangerous tool, but not against Ryobi.  As I've said before, this isn't about safety and "the right to cut my finger off" as Steven Colbert puts it.  It's about how a manufacturer can be found to be producing a "dangerous and defective" product for not including a feature that didn't exist.

Up until recently, there was only one saw on the market with a system that saves the user's hands, the one produced by Saw Stop.  Their system was self-sacrificial: when it fired, it damaged the aluminum piece that stopped the blade and both that piece and the mechanism had to be replaced.  It potentially damaged the blade and saw itself.  It's expensive, but cheap compared to ER costs and, one would argue, cheap compared to life without a finger or worse.  But the CPSC voted 5-0 to look into requiring some sort of blade stopping technology on all new table saws, virtually giving a monopoly on saw production to Saw Stop - should they rule it's mandatory.

Markets, though, respond to competition by encouraging the competitors to develop a better system which outperforms the market leader.   Saw Stop's effective monopoly ends now with the introduction of the Bosch Active Response Technology™ System on their 10" portable contractors' saw, called a GTS1041A Reaxx Jobsite Tablesaw.  Unlike the Saw Stop system, the Bosch Reaxx doesn't grab the blade and have to be replaced after each stoppage.  Instead, a dual cartridge (possibly a CO2 cartridge) punches a release and the spinning blade is dropped below the table.  Should the system activate, it can be reset and work resumed in a minute.  The blade and saw remain undamaged.  Yes, you'll get nicked by the blade, just like with the Saw Stop, but you keep your fingers and your saw.  Sounds like a better trade to me.  The dual cartridge can be replaced after use and a trip to a factory service center is recommended after "a few dozen activations". Personally, I think if you activate this thing a few dozen times, you should take up a profession (or hobby) that doesn't involve sharp things.

In my mind, it's a better system than Saw Stop's system.  Whether or not it's a better saw than Saw Stop's equivalent I don't know.  There are problems with Saw Stop's system working on damp wood, and since this isn't on the market, there are no reports at this time.  One commenter at Fine Woodworking said it'll be available in the fall, with an MSRP of just about $1500.  Since their saws seem to sell for half of MSRP at Amazon (convenience) figure street price will be $750-ish. Video here. 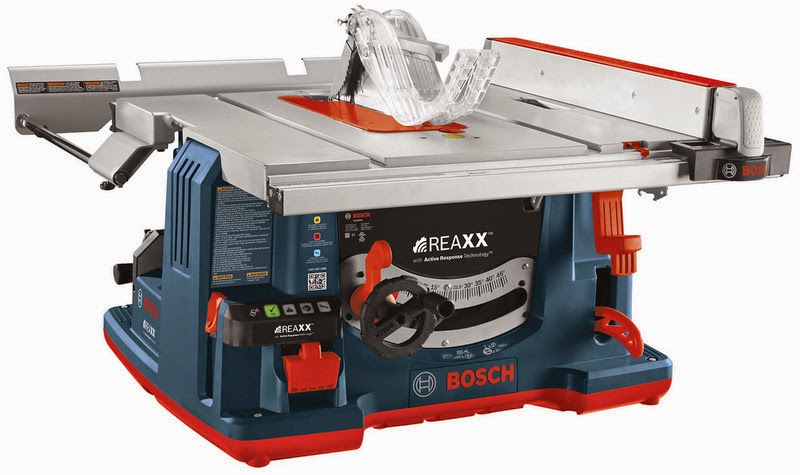 Posted by SiGraybeard at 4:25 PM