We had an unexpectedly nice weekend pop up; the kind of clear blue skies, moderate temperatures and breezy days that just invite you to "get out and stay out".  It probably topped out around 70, with NE winds at 15 or so.  We decided to hit the gun range and take a few guns we just don't use enough.  Chances are, most people with more than one or two guns have one they don't get to often enough.  We took Mrs. Graybeard's Marlin 336XLR in .30-30 and my DPMS LR-308B (more or less a .308 AR-10 clone) to the 200 yard benchrest range and then stopped at the pistol bays on the way out to run a box through a couple of pistols, my Sig P238 and XDm 3.8 in 45ACP.   Both of us shot everything.

Gosh, that's a fun way to spend the day.

The last time I had my DPMS 308 out, I had gotten it to reliably fill a 4" circle at 200 yards.  I'm happy to report that it can pretty much still do that after a long sit in the safe.  Both of us put every shot onto the 12" target at 200 yards.  The lever action gave us some issues, though.  Right now, it's got a Hornady LEVERevolution round jammed in the magazine and the lever won't move.  The rifle is locked up tighter than a drum.  Time to try taking it apart.  Carefully...

Unfortunately, my attempts to take pictures of targets through the spotting scope really sucked badly.  This is the least junky shot of a target at 200 yards through the spotting scope.  That's with a bunch of processing.  Another 8 or so exposures were just straight into the dumpster.  It sucks, but you can count 17 holes (the first 3 were at 100 yards, just to check out the sighting accuracy).  (For the unfamiliar, I move my POA around so I can keep track of where I'm hitting it better.  Otherwise, the center of the target gets too dense to see well) 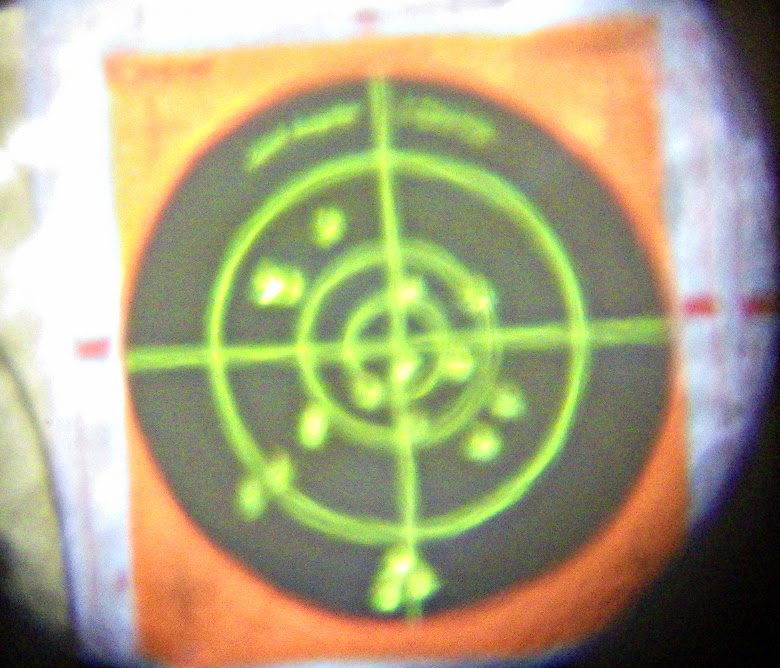 Yesterday, I was ready to glue the guitar neck onto the body, but when I pulled off the blue painters' tape I found a couple of things I'm not really happy with.  I'll have to wait till next weekend to straighten that out.