While they still haven't released the 330 page set of rules they voted on a week ago, the FCC has released a five page summary.  Consider this all propaganda or PR (same thing).  Glittering generalities that don't make any sense when you think about them.

Short detour for the very newest readers.  My day job is as a radio design engineer.  While I'm currently designing weather radars, most of my 30 years as an engineer has been in systems that send and receive data.  I say that to point out that I know a bit about the technical side of getting data from place to place, and what bandwidth really means.

Their "Bright Line Rules" say No Prioritization; the "all bits are equal" argument.  Given that bandwidth isn't infinite, and never will be, how can this make sense?  In reality, there are services that matter more than others.  For example, it doesn't really matter if an email takes a minute to assemble at the receiving end, and it doesn't really matter if your shopping cart or bank transfer takes a few seconds longer, or goes slower to allow a video to stream without buffering, but saying No Prioritization means forbidding slowing those to allow video to stream.  If nothing is higher priority, then that means your video will be slowed by making everything the same priority.

Since no traffic can be prioritized over any other legal content, in my opinion, that makes ISP Spam filters illegal.  Spam is legal, after all.  Right now, around 2/3 of the Internet traffic is spam (one article I read measured 90.4%!).  The FCC Document says No Prioritization, and that "providers may not favor some lawful Internet traffic over other lawful traffic".  Since spam is lawful traffic, it has to be treated like all other bits. I wouldn't be surprised if a big company sued to get their junk through.

If all bits are truly bits, it's probably going to impact things you haven't thought of.  You probably don't consider your TV as internet traffic, but to your broadband provider's cable, fiber optic, or wireless link, it's all bits.  Those bits will be slowed by Internet traffic, too.  Let’s say a new service comes online; an Ultra HD video 24/7 streaming service that will use 75% of your ISPs bandwidth (not a bad comparison to Netflix coming online when providers weren't ready).  The ISPs are forbidden from charging them more, and they have to just let everything buffer at the exact same priority, so they’ll slow down everything else you do.

It seems to be based on the idea that we have infinite bandwidth, or that bandwidth will expand indefinitely.  That seems optimistic at best, if not stupid.

The build out of the network capacity that has gone on for the last 20 to 30 years is nothing short of amazing.  My guess is that's going to end, or slow dramatically.  Gun Free Zone offers this perspective:


When I came into the internet, it was through American On Line.  It charged me (IRRC) $2.45 per hour of usage at 9,600 bps and I had to get a spare phone line so our main wasn’t blocked if I was online. If I got distracted and forgot to disconnect, that monthly bill got huge ensuing significant fights with SWMBO.

Right now I am with one of the big companies that according to the FCC need to be reigned in. I am paying $50 a month for 25 Mbps unlimited and I killed any phone land lines long ago.

Now a simple feat of math: If was still paying AOL prices and connected 100% of the time ($2.45 x 24 x 365) at the end of the year I would be paying $21,462 on a really slow connection. Right now on high-speed Internet unlimited, I am paying $600 a year. That is what? a forty-fold decrease in price with an almost thirty-fold increase in speed on an unregulated internet subject to the whims of the free market? 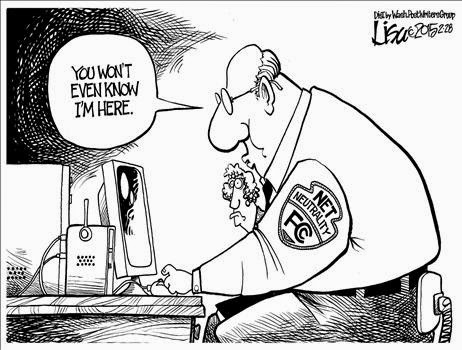