Another Technical Analyst Weighs In

A few weeks ago, I drew on an article by Peter Degraaf showing technical analysis that a major market crash is likely to come.  Tonight I want to draw you attention to another analyst, Clive Maund, who repeats many of the same diagrams and adds more context.  For example, he mentions the dome pattern in that previous post and points out some more details.  This chart is from August 7th, before the big drops, but based on the dome pattern and how the 50 day moving average was dropping below the 200 day MA, he started warning.  By using the dramatic red arrow pointing down, he was saying the market could go into free fall from there. 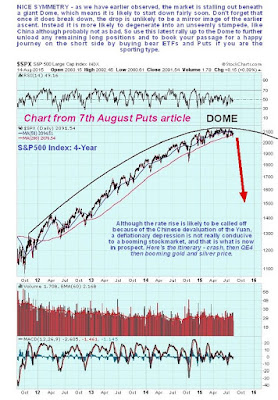 Which it did.  And he presents several plots to indicate it's not done falling yet.  This is not the time to be buying on the dips.  He even shows how the plunge protection teams have done nothing but set up all the indicators that the next big drop is coming.

The article features several good graphs with lots of explanations.  It includes terms I've never seen before, so I'll have to go research them.

I don't think there has been a real stock market rally since the crash of '08 and I don't think it has been a real recovery.  The market still hasn't recovered to even its 2008 numbers when corrected for inflation, and has come nowhere near its peak in early 2000.   John Williams of Shadowstats has data that says the real unemployment number isn't the 5.1% they reported, it's more like 23% and the reason for the difference is the millions of people out of the labor force and no longer counted as unemployed.

The Fed is between the proverbial rock and a hard place.  As Clive Maund puts it:


The Fed faces a desperate dilemma – it wants to start a rising interest rate cycle in order to eventually scale down its massive balance sheet and to head off a threatening collapse of the dollar and Treasury market, but if it does so it will collapse the stockmarket and create a depression. If it raises rates at its next meeting on 16th – 17th markets will crash. If it doesn’t raise them, markets will probably crash anyway, because it will be interpreted as meaning that the economy is too weak to handle even a miniscule rate rise.

As an opposite to his last point, I think there's some chance that if they were to raise rates, it might well show the rest of the world that there are adults in charge who know they need to do so and that might encourage the markets.