The US mint set very healthy year over year sales increases in August.


According to the latest data on the mint’s website, sales of the American Eagle Bullion gold coin amounted to 101,500 ounces last month. ... Year-over-year, coin sales rose 306% when compared to the 25,000 ounces sold in August 2014.
...
The mint reported American Eagle silver one-ounce coin sales of 4.935 million ounces, more than double the 2.088 million ounces sold during the same month last year.

But everyone knows gold is doomed, right?   Hey, that's the Washington Post!  Who are we to question?  I'd say that apparently whoever they were that bought three times more gold in August 2015 than 2014 thinks it's alright to question the WaPo.  Likewise, a substantial number of people seem inclined to agree with Jim Sinclair's observation that "Silver Will be Gold on Steroids" in what he sees as the coming rally.  (You might recall me asking "Is the Next Bull Market in Precious Metals Starting?" about a month ago).

Sinclair believes that in the coming economic collapse/massive corrections that "...gold is going to levels that today are considered more mental illness than monetary analysis."


Renowned gold expert Jim Sinclair stands by his prediction last year of an eventual gold price of $50,000 per ounce. Sinclair explains, “You have to understand we are going into unprecedented deflation, and it’s the reaction of central banks around the world to the concept of deflation that brings about hyperinflation. . . . There will be debt monetization of all kinds of debt to maintain some sort of equilibrium. The price of gold is going to go to a level that is going to surprise everybody. I was told that this is a rally that you won’t sell. That means gold will go to a level and not react violently down from that level. . . . This is when gold is going to levels that today are considered more mental illness than monetary analysis. Silver is best understood as gold on steroids because whatever potential and direction is taken up by gold, silver will be multiplied by 2 or by 5. . . .Silver will outperform gold.”

"May you live in interesting times"? 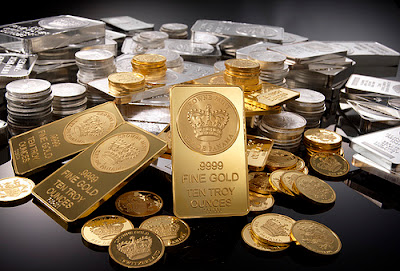