One of the things you might have noticed if you come around here often is that I do tend to grade my predictions.  It always frosted me that we'd see pundits on the news opinion shows giving all sorts of predictions but never seeming to suffer any consequences for being wrong.  (Of course as chief cook and bottle washer sole proprietor of this blog, nothing's going to happen if I'm wrong, either.  Unless I fire myself.)

So what?  Early in the month, I noted several things coming in September that had the potential for creating cascade failure of the economatrix.  While the economic risk isn't over, September is, so I thought I'd take a look at these.  It may help to have another tab open in your browser to read it - I'm not going to copy everything here.
So it was a good month, in terms of nothing really bad happening.  I only got 1 of 4 right, as far as I can tell tonight.  On the one hand; it's good to be wrong about these things.  On the other hand, .250 is an OK batting average, but 1 for 4 as a passing completion number will get a quarterback fired in the NFL.  In real life, if I'm only right 25% of the time at work, well, would you want to fly on a plane with critical systems that are only designed 25% correctly?  Should I fire myself? 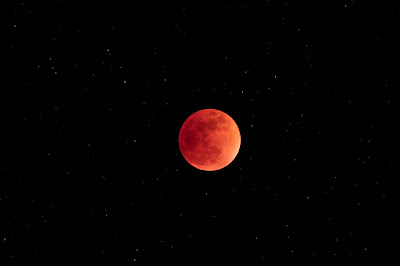 A friend who retired a few years ago took this photo of this Sunday's eclipse from his home in New Mexico.  Out of respect to him, I won't publish his name, but it's a vividly beautiful picture.   From my yard it was an orange-red smudge in the clouds.