Yellen and the Fed Agree to Keep Starving Savers

Doubtless you've heard that Fed Head Janet Yellen announced there would be no interest rate hike or relief from the Zero Interest Rate Policy which has been literally impoverishing, if not outright starving, savers since December of '08.  If you're one of the millions of retirees who can't earn enough on your savings to grab a cup of coffee, they're still transferring (indirectly) what you could be earning to the big banks.  They're distorting the world's economies so badly, it's quite possible it can never be fixed again.

Last July, I posted a piece that included an introduction to Yield Purchasing Power, YPP, with an example I'll cut down a bit here:


Yield Purchasing Power (YPP) shows how much you can buy, not with a dollar of cash, but with the earnings on a dollar of productive capital. No one wants to spend their life savings or inheritance. People are happy to spend their income, but not their savings.

Yellen says inflation is running so low they need to keep ZIRP in place to try to create inflation.  The collapse in YPP shows that inflation is very real and very large.  It also shows the Fed doesn't consider savers' ability to live on their life savings, in case you were under any delusions they cared about you.  Look at how much capital you need to support a middle class lifestyle.  Measured in dollars, the price of this capital is skyrocketing.

Not only did Yellen say there was no inflation problem, she said the FOMC discussed driving interest rates negative, charging you for money left unspent in your bank, but decided not to do it.  I assume that's followed by an implied "yet".


One member of the FOMC would add more stimulus to the U.S. economy by moving interest rates into negative territory. However, it is “not something that we considered very seriously at all today,” Yellen said.

Karl Denninger over at the Market Ticker is calling for all their heads, but that doesn't solve the problem.  Unless the Federal Reserve is drastically structurally changed, it's going to happen again.  The Fed, has painted themselves into a corner on this.  They really missed the window to raise rates.  They should have raised rates last year, when their (phony) numbers show more growth and promise than they do now.  Now, you've got to believe if they raised rates a paltry quarter percent (so that money you earn interest on would double in a mere 288 years) the banks and brokers would throw a fit and probably drop the DJIA another thousand bucks.  On the other hand, if they don't raise rates, some number of traders are going to realize the Fed is out of ammunition and that could cause the market to tank, too. 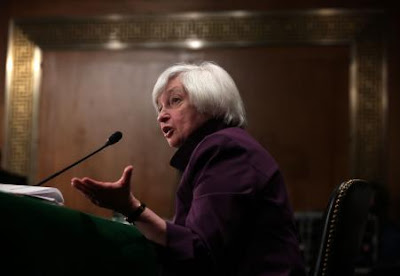 (source)
Over at Bonner and Partners, Bill Bonner has been playing around the last few days channeling Janet Yellen's thoughts while lying awake at 4AM staring at the ceiling.  (Part 1, part 2)  Today, he channeled a speech in which Janet admits she's clueless and no one person or small group can know the things they need to know to their job.  A tease.


“Look, I’m just a girl from Brooklyn who went to Fort Hamilton High School. Do you really expect me to manage the world economy? My father thought I should go into medicine. And maybe he was right. Doctors have real knowledge… not just this hocus-pocus of modern economics.

“I’ve already proven I don’t know any more of what is going on than you do. The biggest financial disaster of the century, the housing bubble, hit me like it hit you – as a surprise.
...
“Everything has to come to an end sometime. And seven years of this silly ZIRP seems like more than enough. Yes, we know that the stock market could crash. And yes, we know that a lot of businesses – who have come to depend on these ridiculous rates – could go broke.

“But there’s no virtue in putting off the inevitable. When Humpty Dumpty is going to fall off the wall anyway, give him a push and get it over with.”