I Wonder if He Thought of This Part? 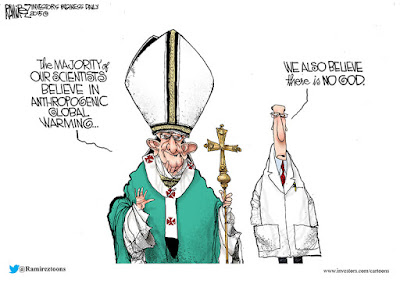 I was going to talk about the Pope's nonsense on air conditioning, but I couldn't bear to read his encyclical.  Talk about TL:DR, that's a two hour sermon.  So I'll just note that the forecast for the Vatican City for tomorrow, 9/24, is for a low of 54 with a high of 72.  The forecast here is for a low of 72 and high of 88, with a 50% chance of thunderstorms.   When our overnight low is the same as his daily high, that says a lot about the relative need for air conditioning.  I mean, I really doubt he'll say no one should use heating when it's sub freezing outside; where's the logic in saying you'll "condition" your temperature when it's too cold but not when it's too hot?  By they way, 72 in the morning is an indication that fall is approaching.  In August, it's full tilt Crematoria here.  Over the summer it tends closer to 78 or 80 for the overnight low.  It was 71 on Monday morning and I honestly believe it hasn't been that cool since last April.