From Karl Denninger at Market-Ticker, we get this tale of what Net Neutrality is really going to mean to us.  First, the setup from TechCrunch:


During an investor call today (link via Ars), Comcast executive VP David Cohen said that he predicts bandwidth caps (or, as ISPs prefer to put it, “usage-based billing”) to be rolled out network-wide within the next 5 years or so.

The reason they haven’t done so already? They’re still working out exactly where they can cap things before they start getting phone calls — that is, before people start calling up to cancel. Meanwhile, making things more complicated tends to scare people away, so they don’t want to just offer up multiple plans/tiers — so before they make any changes, they need to find that plan that works for almost everyone.

Switching over to Denninger:


See, at the core of the problem is one little company called Netflix that is responsible for more than a quarter of all traffic on the Internet during the evening hours.  And that company is hell-bent and determined to not pay for the load that it presents to the end-attachment points or how it concentrates that load, both of which break (in a bad way) the models that the ISPs (cable companies, etc) use to build their networks.

All problems of this sort can be solved by money, and this is fundamentally a fight about money.  Streaming an "SD" movie requires about a gigabyte per hour, per device.  HD doubles that and 4k doubles it again.

Further, it's not just data delivered over time, it's another qualitative measurement called jitter.  In other words you can't have a stream that has material gaps in the delivery of the data or the display of your video will stutter and, if bad enough, fail to play entirely.

Karl goes on to run numbers on the amounts of data we're talking about here, and some of the business/politics that has been involved.  I've gathered from reading his place pretty regularly that he isn't particularly fond of Netflix, and this piece definitely has that flavor.  On the other hand, if he's right about what has been going on, he really has a point.  And his experience from having owned an ISP is full of reality.


While the problem is less-severe for "landline" (e.g. Cable, FIOS, etc) customers it is by no means not present.  If you have a 50Mbps connection from Comcast, for example, you could consume 375 Megabytes per minute.  That works out to 22.5Gb/hour roughly 16.2 Terabytes per month.

Again, Comcast cannot engineer for that while charging you $50/month.  Can you buy such service?  Sure!  I used to buy service of similar quality as an ISP all the time -- a 44.7Mbps (each direction) DS-3 "clear channel" line for which I actually paid to move that full amount of data all the time.

But while it's gotten much cheaper than the five-digit price tag per month I paid at that time for such capacity it sure as hell isn't $50/month even today.

There was a lot of sentiment from young tech heads that they were being screwed because their ISP was wanting to charge extra for Netflix or other streaming services.  Net Neutrality, at its root, says "all bits are equal" and they can't charge you more for one service's bits.  But they can charge you what it costs them to provide those bits and they can meter how many bits you use.  Simply, they're going to have to charge what it costs them or go out of business, and if they don't charge enough, they can't get enough money to build out infrastructure for the Next Big Thing (Netflix 4K?).  By the looks of it, we'll all be having metered internet services in the next few years.

Go read the rest of the piece at Market Ticker.  Let it sink in. 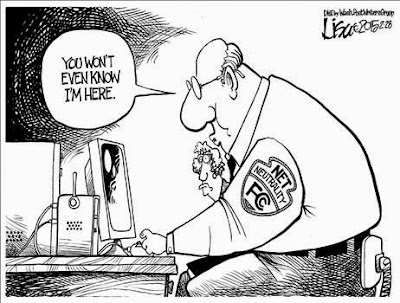