This week, Design News brings us a story about continuing progress in prosthetics, in this case a hand, that can actually feel.  In a project funded by DARPA, the Applied Physics Lab at Johns Hopkins University was able to give a 28-year-old test patient who’s been paralyzed for more than a decade the ability to “feel” physical sensations through a mechanical hand connected directly to his brain.

Note that said it was wired into his brain directly, not interfaced to his skin in some place.  According to Ars Technica:


The prosthesis used in the experiment ... is capable of detecting when pressure is applied to a finger. DARPA reported nearly 100 percent accuracy in an initial set of tests. Despite being blindfolded, the volunteer, whose name is being withheld, was able to tell which extremity was being touched, and even when researchers were attempting to trick him.

"At one point, instead of pressing one finger, the team decided to press two without telling him,” Sanchez explained. “He responded in jest asking whether somebody was trying to play a trick on him. That is when we knew that the feelings he was perceiving through the robotic hand were near-natural."

DARPA themselves have a press release on the hand with a little more information:


“We’ve completed the circuit,” said DARPA program manager Justin Sanchez. “Prosthetic limbs that can be controlled by thoughts are showing great promise, but without feedback from signals traveling back to the brain it can be difficult to achieve the level of control needed to perform precise movements. By wiring a sense of touch from a mechanical hand directly into the brain, this work shows the potential for seamless bio-technological restoration of near-natural function.”

The clinical work involved the placement of electrode arrays onto the paralyzed volunteer’s sensory cortex—the brain region responsible for identifying tactile sensations such as pressure. In addition, the team placed arrays on the volunteer’s motor cortex, the part of the brain that directs body movements, so he was able to control its movements with his thoughts.

DARPA recently funded a $6.98 million contract to DEKA Innovative Solutions Corp. to continue development of the so-called “Luke Arm,” nicknamed for the fictional robotic arm given to the character Luke Skywalker in the Star Wars film series, according to a contract announcement on the DoD website. 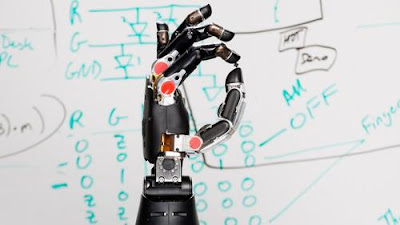 From the human side, I wonder what it was like for a guy who had no feeling in his hands for 10 years to have those sensations again?  I can only imagine it must be incredible.