This is my Shocked Face

Headline news for the day from the Daily Caller:

Not only that, but they reported that experimental mixed units of men and women didn't perform as well as the all-male units.

I sure hope they didn't spend too much money on that.  But it's not just the Fed.gov, its the .Mil, and they're not known for extreme frugality.

Skepticism aside, there are interested snippets in the study.  To list a few:
Look, I have nothing against women in the military, but there are places where raw strength and "brass knuckles brutality" offer a distinct advantage and it seems those places should be left to the men.  Ground combat sure seems to be one.  No, I was never in the military, never claimed to be, but it has always been my understanding that despite the great advances in weapons, logistics, air support and everything else, there come times when fights are just that: fights, just like they've been for thousands of years.  The Marines report cites:

It further argues that the nature of battle “remains largely unchanged throughout centuries of warfare, despite technological advancements.” 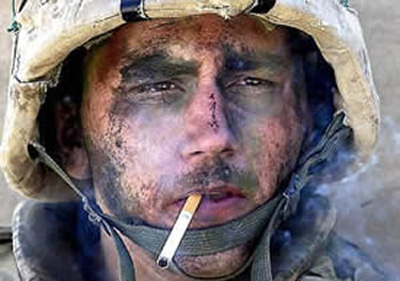 Probably the most famous photo of a Marine with the after-combat, thousand yard stare, from Fallujah Iraq, in 2004, James Blake Miller.

Labels: the big picture, what?