Techy Tuesday - A Big Couple of Weeks in Electronics History

On August 28, 1958, Jack St. Clair Kilby of Texas Instruments demonstrated the first functional circuit made from a collection of pieces of silicon; it was a multivibrator, a type of oscillator or two state circuit.  Kilby had been hired by Willis Adcock the previous May, three months prior.  Since he had only been at TI those few months, he didn't have vacation time when the plant was to be shut down for a mass vacation.


[Kilby] was “left alone to ponder” and sketched out a circuit made entirely of semiconductors.

When Adcock returned from vacation, Kilby showed him the sketches. Adcock was skeptical and requested proof such a device would work.

While an interesting midpoint, it still wasn't the big prize that Kilby is known for today.  That came a couple of weeks later: September 12, 1958.  Jack demonstrated the first completely integrated circuit, made from a wafer of germanium, an embodiment of the same basic multivibrator circuit.  It wasn't much to look at and the component density wasn't an improvement over previous attempts to miniaturize electronics, everything is glued to a glass slide which is about an inch long, but it was the start of the integrated circuit industry, leading inexorably to today's submicron geometry transistors etched by the million in today's world. 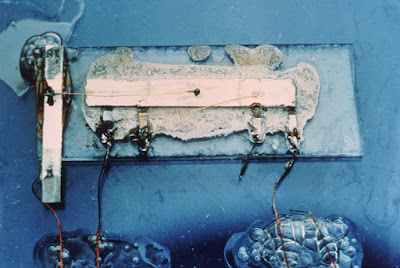 It was integrated with all the components in the bar of germanium, but the connecting wires are visible here.  Integrated wires were still yet to come, but the principle of having all of the circuit elements created from a piece of semiconductor was demonstrated.  In February of 1959, Kilby applied for the patent on the IC and was granted it a few months later.  TI is still proud of being the company where the IC was invented and still has a historical web page up about it.


The integrated circuit first won a place in the military market through programs such as the first computer using silicon chips for the Air Force in 1961 and the Minuteman Missile in 1962. Recognizing the need for a "demonstration product" to speed widespread use of the IC, Patrick E. Haggerty, former TI chairman, challenged Kilby to design a calculator as powerful as the large, electro-mechanical desktop models of the day, but small enough to fit in a coat pocket. The resulting electronic hand-held calculator, of which Kilby is a co-inventor, successfully commercialized the integrated circuit.

The integration of wires was to come in 1959, when Fairchild Semiconductor co-founder Bob Noyce demonstrated his planar integrated circuit.  Robert Noyce went on to found Intel with Andy Grove and Gordon Moore in 1968, and many historians refer to Kilby and Noyce as essentially co-inventors of the integrated circuit.  But now we've wandered too far from our subject, three remarkable weeks in 1958.