I didn't see this in Janet Yellen's notes from yesterday; maybe I wasn't paying close enough attention to the sources I looked at, but Fox Business News reporter Melissa Francis this morning pointed out what I missed.  It's about the 2:45 marker in this video from today, but Yellen essentially said her "accommodative" monetary policy put people back to work and reduced income inequality.  To quote exactly, in context and all, from the Yelleninator:


“The main thing that an accommodative monetary policy does is put people back to work. Since income inequality is surely exacerbated by having a high unemployment and a weak job market, that has the most profound negative effects on the most vulnerable individual. To me, putting people back to work and seeing a strengthening of the labor market that has a disproportionately favorable effect on vulnerable portions of our population, that’s not something that increases income inequality.”

I will note in passing that in the dark ages, when I was growing up, "accommodative" was a term we used for young women of relaxed moral virtue.   We'd say, "boy howdy, Maria sure is accommodative for $5!".  Or "if you can spare a couple of bucks, Carlotta can be very accommodative".

Getting back to the point, everything Yellen is saying is factually wrong.  They haven't put people back to work.  We have the lowest labor force participation rate since March of 1978 under President Peanut Farmer, and John Williams at Shadowstats says that if unemployment were recorded like it was in Carter's days, it would be stated closer to 23% than the reported 5.1%.

Her income inequality statement is also wrong.  Census Bureau data shows that the median income for "all households" in the US is just $53,657 - the last time it was this low was  before 1995 according ton this chart on Business Insider.  She's not just wrong, she's completely wrong.  She's 180 degrees out of right.  On a compass, if  right was North, she'd be pointing South!  She hasn't helped reduce income inequality, the Fed's ZIRP is the biggest wealth transfer in history; in this case from savers and small businesses to the giant banks.

None of what I'm pointing out is simply my opinion.  They're both widely reported numbers: from the US Census Bureau for the income data and from the Federal Reserve of St. Louis for the labor participation rate. 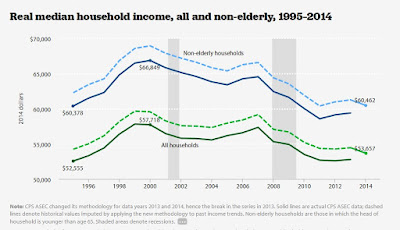 I'm left with wondering what's up with Janet?  Is she an Obamanoid political hack?  Is she not capable of seeing the world outside, so blinded by her econometric models she can't see straight?  Is she just an addled, borderline incompetent, professorial type?   Not that these are mutually exclusive.  She could be all of these.