Hungary - On The Ground With the "Refugees"

A friend sent a link today to this video posted on September 5th.  Unless you speak Hungarian (I believe), don't bother with audio.

The incident took place at a train station in Hungary, where police brought water and packages of food to the refugees.  The story was that the food and water were refused because they came from the Red Cross and the packages bore a cross instead being marked as Halal - in their native language I assume.  They would not take aid with a Christian symbol.  Several of the refugees, reported to be Syrian, can be seen throwing water bottles and food onto the nearby train tracks.  Children accepted the food only to have it taken by teens or adults and thrown away.

You will note that the population appears to be almost entirely men of military age.  ISIS?  Some other group?  Nobody knows and nobody is allowed to question that.  Bretibart reports that as this is unfolding in Europe, five of the wealthiest Gulf States have refused to take in one single Syrian refugee.


Yet amidst cries for Europe to do more, it has transpired that of the five wealthiest countries on the Arabian Peninsula, that is, Saudi Arabia, UAE, Qatar, Kuwait and Bahrain, not one has taken in a single refugee from Syria. Instead, they have argued that accepting large numbers of Syrians is a threat to their safety, as terrorists could be hiding within an influx of people. 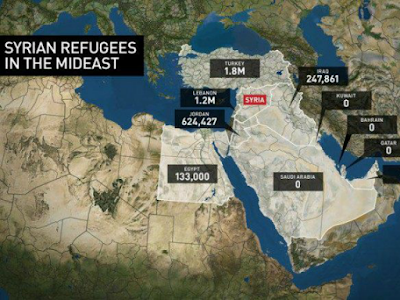 We're watching Europe being taken over without a single shot being fired.

Posted by SiGraybeard at 7:29 PM