Before It Could Move 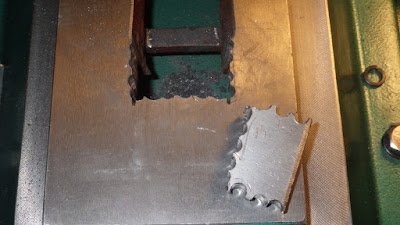 I cut out the marked square I showed, 1-1/4 on a side and cleaned it up.  I cut it out by drilling a lot of holes, using a 1/4" bit and an AC powered drill.  I started out with my battery powered drill but it was just obviously weak for the task and I thought I'd try the "big" one.  Night and day difference, but it has a label rating of 1-1/4 HP while the battery powered one never mentions power.  I cut the web out between the holes with both a battery powered reciprocating saw along the sides where the blade fit, then switched over to an AC powered jig saw which also made short work of the sawing.  There was some really irregular looking junk in the casting on the back of that channel you see (out of picture at top center) that I thought might limit the motion of the ballnut and table, so I cleaned that up with a grinding bit on my battery powered drill.

The next step was to take the motor and headstock off.  This ends up weighing 50-ish pounds (rough guess).  I found a guy on YouTube (N1BPD) who had a video of taking the motor and Z column off and then another that showed him building it back up. 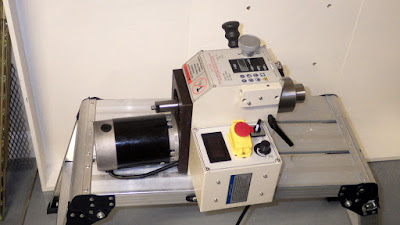 Which leaves the base and column as the only pieces on the tool cabinet/stand. 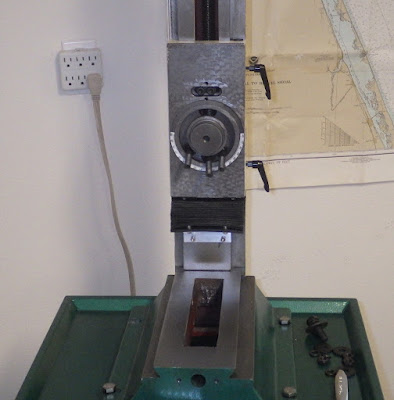 On to taking off the column and here's where I hit a dead end.  There are four large socket head bolts in the base of the Z column holding that cast iron in place.  They take a 10mm Allen key, and as luck would have it, I had two options: a ratchet set from Sears with the novel feature that most of the sockets will pass any length bolt through them, and a nice, tool steel, Allen wrench set's 10mm key.  Two of the bolts were moveable and I got them loose, but the other too resisted everything I could do to them.  At one point, I actually tried to stand on that 10mm key.  Since it was Sunday, I said Uncle and went to think about it and figure out how much I was going to have to pay to break those two bolts loose, while watching the Packers/Cowboys playoff game.

It ended up being fairly cheap, because Mrs. Graybeard convinced me to try an adapter to mount the hex key socket on my 1/2" drive breaker bar.  Thankfully, that worked and I was able to pull the Z column.  This was right after I had watched the video where N1BPD built up his Z-axis and got it running.  I decided I had all the parts and had been basically ready to do the modifications on this for quite a while, so why not do it and get the system running? 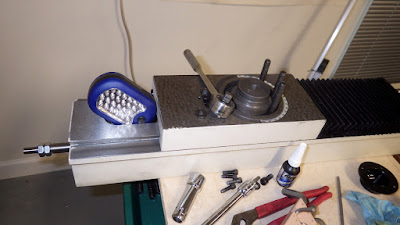 This pic was while putting the Z-axis ballnut mount in place.  I've written a lot about this part.  The motor mount and standoffs were the parts I made for the original approach I was taking, before I switched to the ballscrew approach last April (I think).  I think I made them about a year ago. 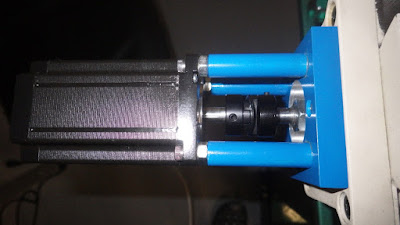 If you look carefully at this picture, you'll see something strange.  There's a 1/4-20 nut on each of the round, threaded standoffs.  When I first built this, the motor quickly jammed and during troubleshooting, I realized the motor wanted to be about an eighth inch farther away than the standoffs allow.  A quick check of the relevant drawing said they were supposed to be 2.000 inches long, +/- .005, and they were.  Rather than make new standoffs, this was a quick fix.  It passes a 10-32 screw to mount the motor and looks neater than a stack of washers. 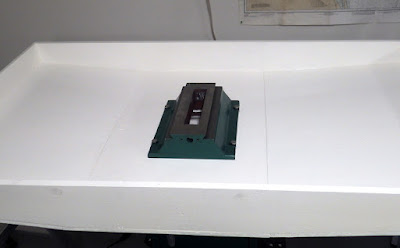 Tonight, the base is remounted in my wooden "boat"; the chip tray I built last summer and that has been sitting along the wall while I got to this point.  I had always envisioned trying to hold the full mill, or parts of it, over the chip tray with a crane and struggling to get it in position.  Broken down this far, it's just a 50 pound-ish hunk of cast iron to set down in the tray, finagle into place and bolt down.  I could use to seal the base so that cooling fluid can't run under it.