Obama's Fundamental Transformation of Israel and the Mideast

Much has been said and much ink has been spilled about the US not preventing UN resolution 2334 condemning Israel from passing 10 days ago.  There has been much less talk about the way the resolution fundamentally transforms the region by overturning almost 50 years of established law.

Caroline Glick, deputy managing editor of The Jerusalem Post, has a different perspective that makes for an interesting read.  It was a featured column at Townhall last Saturday, New Year's Eve.  While it's a bit long, I would recommend anyone with interest in the area read and understand it.  Essentially, 2234 is the fundamental transformation of Israel.  Resolution 2334 doesn't stop with an attack on Israel, it undoes much of the legal basis for Israel's internal decisions since the Six Day War in 1967.  It undoes UN Resolutions 242, 338, and the Oslo Accords at a minimum.  A little background according to Glick:


Resolution 242 anchored the ceasefire between Israel and its neighbors at the end of the Six Day War. It stipulated that in exchange for Arab recognition of Israel’s right to exist in secure and defensible borders, Israel would cede some of the territories it took control over during the war. 242 assumed that Israel has a right to hold these areas and that an Israeli decision to cede some of them to its neighbors in exchange for peace would constitute a major concession.

Resolution 2334 rejects 242’s founding assumptions. 2334 asserts that Israel has no right to any of the lands it took control over during the war. From the Western Wall to Shiloh from Hebron to Ariel, 2334 says all Israeli presence in the areas beyond the 1949 armistice lines is crime.

Given that Israel has no right to hold territory under 2334, it naturally follows that the Palestinians have no incentive to give Israel peace. So they won’t. The peace process, like the two-state solution ended last Friday night to the raucous applause of all Security Council members.

As for the boycott campaign against Israel, contrary to what has been widely argued, 2334 does not strengthen the boycott of “settlements.” 2334 gives a strategic boost to the boycott of Israel as a whole.

2334 calls on states “to distinguish in their relevant dealings, between the territory of the State of Israel and the territories occupied since 1967.” Since no Israeli firms make that distinction, all Israeli economic activity is now threatened with boycott. [Bold added - SiG]

A rather interesting interpretation, and one I'm especially interested in (compared to all the others) because it seems to ask the question you never hear politicians talk about: "and then what?"  Politicians and political hack writers almost never talk about unintended consequences of laws (or in this case, resolutions) that are passed.   Caroline Glick's column is about the unintended consequences.  You'll recall Secretary of State Horse Face talking about the two state solution and "land for peace" last week; the unintended consequence that he's unaware of is that by passing 2334, the UN effectively killed the entire "peace process" - if Caroline Glick is right.

I should point out that Glick believes there's more afoot here.  She maintains that before he leaves office Obama will put forward (or not prevent the passage of) another resolution in the UN.


Finally, sometime between January 17 and 19, Obama intends for the Security Council to reconvene and follow the gang at the Paris conference by adopting Kerry’s positions as a new Security Council resolution. That follow-on resolution may also recognize “Palestine” and grant it full membership in the UN.

Then what?  With no recognition of the right to hold territory it took in the six-day war, Israel's entire relationship with the PLO and her other neighbors changes.


As for the Palestinians, resolution 2334 obligates Israel to reconsider its recognition of the PLO. Since 1993, Israel has recognized the PLO despite its deep and continuous engagement in terrorism. Israel legitimized the PLO because the terror group was ostensibly its partner in peace.

Now, after the PLO successfully killed the peace process by getting the Security Council to abrogate 242, Israel’s continued recognition of the PLO makes little sense. Neither PLO chief Mahmoud Abbas nor his deputies in Fatah – convicted, imprisoned mass murderer and terror master Marwan Barghouti and Jibril Rajoub who said he wishes he had a nuclear bomb so he could drop it on Israel and tried to get Israel expelled from FIFA — have any interest in recognizing Israel, let alone making peace with it. The same of course can be said for the PLO’s coalition partner Hamas.

This second paragraph is an important point.  Hamas' charter calls for the destruction of Israel as do the symbols (flags, etc.) of both groups.  Now that they've succeeded in killing the peace process by convincing the Security Council to destroy it's basis in international law (UNSC Res. 242), is there any reason to believe the PLO and Hamas will do anything other than try to destroy Israel?  It could be argued that in taking away the "buffer" that Israel surrounded itself with in 1967, the UN is encouraging another war to re-establish safety zones; perhaps bigger, perhaps different safety zones.  At the least, Israel should decide how to handle matters in its own borders with its own best interest in mind.


Finally, there are the territories themselves. For 50 years, Israel has used the land for peace paradigm as a way not to decide what to do with Judea and Samaria. Now that 242 has been effectively abrogated, Israel has to decide what it wants. The no brainer is to allow Jews to build wherever they have the legal right to build. If the UN says Israel has no rights to Jerusalem, then Israel has no reason to distinguish between Jerusalem and Elon Moreh. [Bold added - SiG; Elon Moreh is a settlement on the West Bank (Samaria) apparently used as a way of saying this settlement is just like old city in Jerusalem to the UN] 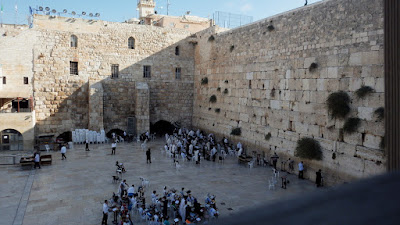 The western or Wailing Wall, a Jewish holy site in the old city of Jerusalem.  My photo.  UNSC 2334 doesn't recognize this site or the Jewish quarter of the old city as belonging to Israel.  It has been continuously occupied by a Jewish population for centuries, except for the brief interval between the formation of Israel in 1948 and the 1967 war that recaptured it.