Samsung: It Wasn't Our Design, It Was the Batteries

Since I wrote two weeks ago about an independent consulting group's report laying the blame for the burning Samsung Galaxy Note 7 phones on Samsung's mechanical design, I feel that fair reporting says I should let Samsung tell their side of the story.  Samsung held a press conference Monday, the results of which were published today in EE Times, and while they say it was the batteries fault, their argument is reminiscent of the conclusions of the independent consultant Instrumental covered two weeks ago.

Samsung pinpointed the handset design caused overheating of “Battery A,” which was used in the Note 7 model first recalled. “Battery B,” deployed in the second recalled Note 7 model, is now identified with a manufacturing defect.

Although the Korean giant refrained from naming the battery suppliers, it is known that Battery A was manufactured by Samsung affiliate SDI. China’s Amperex Technology, a subsidiary of Japan’s TDK, provided Battery B for the Note 7.  [Bold added:  SiG]

In the case of battery A, Samsung says the battery didn't fit properly in its enclosure and admitted to a design problem here, causing the internal plates in the "jelly roll" design to short.  This, in turn led to causing the devices to overheat and catch fire. 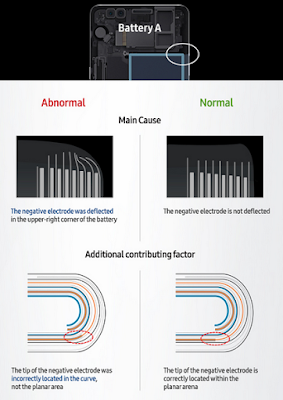 This seems to me hard to blame on the battery vendor.  If Samsung forced the battery in to a corner that was too rounded, either the corner was designed incorrectly or built and used incorrectly.

In the case of Battery B, Samsung points out problems internal to the battery pack.  This is clearly the battery vendor's (Amperex's) problem. 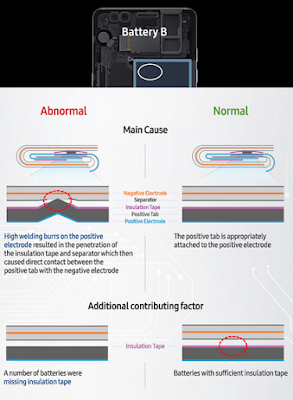 Samsung ruled out any other problems with the phone.  Speculation at the time was that processor-controlled charging might have been the cause, since they were putting a larger capacity battery in the phone and attempting to charge it faster.


Samsung said that the company has implemented a broad range of internal quality and safety processes to “further enhance product safety including additional protocols such as the multi-layer safety measures and 8-Point Battery Safety Check.” The company has also formed “a Battery Advisory Group of external advisers, academic and research experts to ensure it maintains a clear and objective perspective on battery safety and innovation.”

This was a large press conference in Seoul on Monday, complete with Koh Dong-jin, president of Samsung’s mobile communications business, bowing and apologizing for the fiasco.  Samsung made a big point out of saying they had hired external experts, the Underwriter's Laboratory and Exponent, to help.  From my standpoint, I don't know how helpful either one of those would be but apparently Samsung respects them.  The only time I ever worked in a place that got UL approvals, their only concern was the AC powerline until it went into the low voltage supplies.  I don't know how good they are at Li-ion battery problems.  I never worked around Exponent, but they don't have the long history and name recognition that UL has.

Samsung's report doesn't address the thickness issue that Instrumental addressed in their report, covered two weeks ago.  Samsung does address the lack of space around the battery's edges and seems to implicate lack of space in the corner, but Instrumental's observation that their two-month old unit had no space above the battery at all seems to indicate a need for a thicker phone (or less battery capacity).  It's worth pointing out that when a company contracts for a battery it isn't like the way you or I walk into a store and buy one; the buyer creates a procurement specification and then is responsible for verifying what they bought actually meets the specification.  It's a mind-boggling understatement for me to say that a lot of effort goes into this.  It usually entails a lot a meetings, and to qualify a new product, entails extensive face-to-face meetings and testing.  Samsung said it did not plan to take legal action and that it accepted responsibility for asking the suppliers to meet certain specifications.