I'd guess that as long as cheap digital calipers have been available around that most people who play around in the shop (wood, metal, or more kinds) have a pair.  A while ago, I saw the calipers on the top in this picture on sale at Rockler's and bought one. 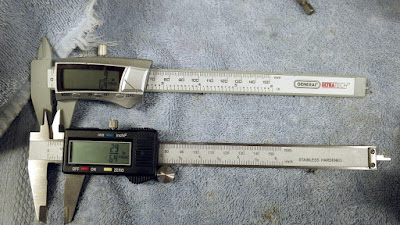 As you can see, they're labeled General, a long established tool importer and seller.  You can also see the main feature for these: they read out in fractions of an inch, down to 1/64.  1/64 is a bit critical for most woodworking, but they work just fine in the metal shop.  Except for the fact that they're made of a plastic or glass-filled plastic and are therefore not as hard (in the scratch or dent resistant sense) as steel calipers would be.  They also read out in decimal inches or decimal millimeters at the touch of a button.

Yeah, I have fraction-to-decimal charts around, and yeah, I have memorized lots of fractions in decimal format, but it's really convenient for things that aren't close to a multiple of 1/8, or a few others that are lodged in my brain.  Plus, it's nice to measure something and know that if I measure .143, which isn't in my memory stack, it's "close enough" to 9/64.  They're handy.

Unfortunately, they also act weird sometimes.  They reset too often and that includes resetting zero or mode.

Enter the calipers on the bottom.  A few weeks ago, Little Machine Shop listed them as a weekly special, and since they're made of hardened steel, that overcomes one of my objections to the plastic ones. Plus, I hoped the weird resetting was EMI and that more metal on the back of the electronics might help.

This is where the implementation issue shows up.  I had to go through 3 sets to find one that works.  The first one was fine when I turned it on for a first look, but then I put it aside because lots of other things were going on (it was a week before Christmas).  When I tried to use them, they were dead.  I opened the battery compartment and found corrosion fuzz inside.  I cleaned that out and replaced the battery and found they were random number generators.  They reset constantly, resetting mode and zero constantly.  I wrote LMS to ask for an exchange, and while I was sitting here at the computer not even touching them, they would turn on by themselves, and choose random modes. It doesn't get much flakier than that.

The second pair arrived the Friday before Christmas and wouldn't turn on.  The battery compartment in these was even worse; so full of fuzz it was almost pressing the plastic open.  I wrote LMS and politely said if they would go through their stock and find me a set that worked, I'm interested, if not, send me a refund.  LMS is known for good customer service and they quickly sent me a third set.  These work much better than the other two.  I've had them reset on me a few times, but it seems to come from sliding them open too fast.  They will turn on just by moving the slide, which is different from all my other calipers, and I can't tell you if that's by design or not.

So do I recommend?  When they work, they're pretty convenient, and I tend to keep mine with me, but that 33% success rate bothers me.  I'd be more inclined to recommend them if you could visit someplace selling them and check them out, maybe pick out a pair yourself.  I see a similar caliper at Horrible Freight and I'd bet that one or two companies in China Incorporated make them all.  If you must order by mail, I don't like the odds of going through three to get one good set.  I'll leave that up to you.

Posted by SiGraybeard at 6:40 PM