I know of two online sources for information:  Accurate Shooter and Precision Rifle Blog.  Of the two, Accurate Shooter, which includes 6mmBR.com and The 6.5 Guys, seems the more active and with more information.  I'm also aware of Sniper's Hide, but I get the feeling it's all by subscription.  I've barely scratched the surface on any of those.

If you wanted to learn long range shooing, where's a good place to dive in and read?  What sources am I missing?

My goal is to stretch out my shooting to our club's 300/600 yard range.  As is often the case, I want to shoot with what I have before I think about going for a full, new kit.  I think the demands for shooting 300 or 600 yards are not as great as shooting 1000 or more, and I expect many common hunting or predator rifles will be good at 600.

I have two bolt guns, a .308 Savage Scout rifle and a Remington 700 in .30-06.  I wouldn't be surprised if the Scout would be fine at those distances, except for the forward mounted scope.  I understand that .30-06 used to be a common long range cartridge, but neither of those is considered a precision long range round by today's standards. 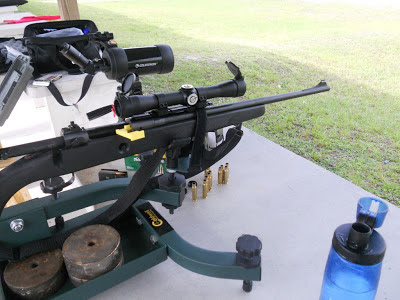