The Clearance Problem Has Been Cleared Up

A couple of days ago, I wrote about putting the table back on my G0704 mill and finding a problem with clearance around the oil tube to the Y-axis ballnut.  I concluded by saying, "Will the thinner tube lie lower and flatter in the cutout and be less susceptible to damage?  We'll find out."  The answer is it didn't.  The next morning, I could see that the tube had relaxed to the point where the table was hitting it.

The root cause is that the vertical edge on that part of the table goes over the oil fitting. The tubing is almost completely under the slide.  It's easy to see when the tube is off. 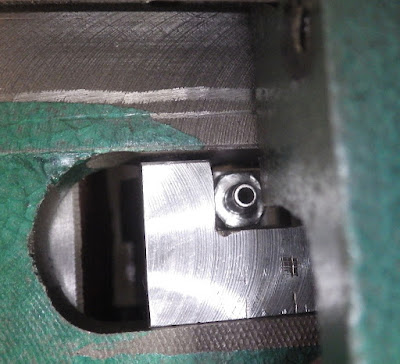 I pulled the new bent tube and made another one out of a longer piece so I'd have more tube to play with.  After I heated the tube and flared it so it fits the oil fitting, I stuck the plastic tube from a spray can of air in it, held it over a heat gun and bent it a little past a right angle (plastic tube to emulate something like putting sand in a metal tube before you bend it - to keep the walls from collapsing/kinking). This was definitely a lower profile bend. I put that in place, but a straight edge sliding over it still rubbed on the tube. If I held the tube down with a finger tip, it seemed to clear, so I put a spot of RTV there and then taped it down with duct tape. It was still too high, so I stacked about 15 pounds of weights on top of it to clamp it as low as it gets. The tube said RTV takes a full 24 hours to cure, but after about 18, I took off the weights and tape to look at it. 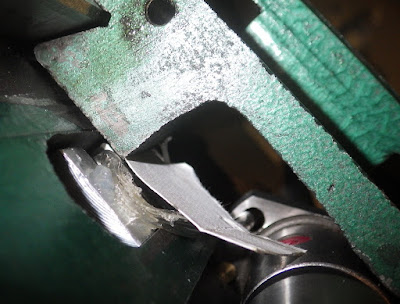 That worked. You can see the gap between the tube and slide in this picture. The white thing is a scrap of business card that I measure at .010".  A .012 feeler gage slipped in there, but a .015 wouldn't.  Is that good enough?  My bet was that if I could be sure that it never went below .005, I'd feel good with it, but I didn't know.

So I decided to machine away the part of the table that crosses and could rub on the tube. The idea is to cut away the underside of the table at about a 45 degree angle - 45 degrees at "eyeball accuracy" is good enough.  The table is about 28 inches long, so you see it requires cutting away a fairly large amount of cast iron.  I had thought of doing this before but concluded I'd need a mill at least the size of the G0704 to do it. A friend suggested an angle grinder. I simply hadn't thought of that because I just don't have experience with using a grinder. I bought one months ago for this project and then used my Sherline mill to do the cutting the grinder was intended for. 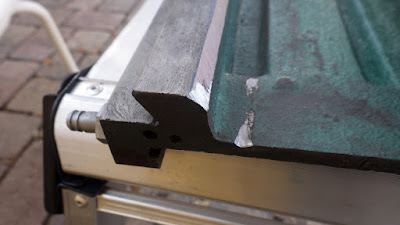 So I pulled the table off and rolled it outside on a dolly (it weighs more than 50, maybe 60 to 70 pounds).  I marked a line about 2/10 of an inch from the edge of the table along the full length of this edge and ground it to look smooth.  This gives you an idea of what the last few inches of the table looked like after cutting. 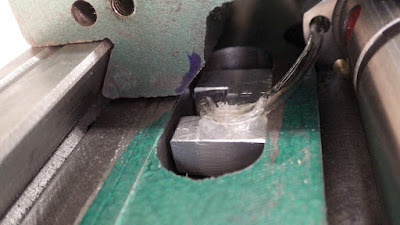 It ended up going very quickly and came out remarkably smooth. Now I have plenty of clearance over that tube.

You know the old saying, "when the only tool you have is a milling machine, every problem looks like a machining problem"  (or something approximately like that involving hammers and nails)?   When I thought about cutting back that edge at a 45 degree angle or so, I though of using a 45 degree cutter in a milling machine, or a straight cutter with the table on a fixture of some sort.  I simply never thought of the angle grinder.  Mind you, as I've said about knife making, after a few dozen silversmithing projects, I've come to believe I can do just about anything with a few hand files.  I could have done this with hand files and taken a week of labor or a few minutes with an angle grinder.  The angle grinder is the way to go!