I've been holding back on you guys for a few days, but since the misadventure of the ballnut removal tool (BRT) and the ball bearing spill, I haven't said that I solved that mess.  I worked on plumbing and posted about that, but getting the balls packed into the bearing and getting the ballnut and screw in place on the Y axis was a major stumbling block.

I succeeded on Wednesday morning.  I had studied a YouTube video a few times and tried repacking the balls on Monday.  It didn't work out.  This guy stresses that there are races in the ballscrew that shouldn't get balls put in them, saying if we did, the ballscrew would jam at some point.  I couldn't see what he was talking about from the video.  About the 10th time I watched trying to see what he was referring to, I seized on a different approach to the job.  Feed the balls into the returns and let them push their way around the races themselves, then I don't need to worry about avoiding a spot.  Wednesday morning, after suitable amounts of coffee, I put on my Optivisors, turned on a back light flashlight, and mixed the spilled 100 ball bearings in grease.  When you watch this video, or many others, you'll see the demo using Vaseline to hold the balls in the race, and it really does work (well, I used Teflon loaded grease - this guy says grease is better but uses Vaseline).  Next thing I knew, within an hour's work, I had all the races full of balls.

Now comes the hard part.  On Monday, I had tried my previous two attempts at a BRT.  Balls got pushed out of place.  After that, I decided to go the route of the cardboard tube BRT, but turned one out of wood.  I had a "pen blank" (pen blank is eBay talk for scrap wood cutoff) I had bought 15 years ago, 3/4" square and about 6" long.  I turned it to slightly over 0.5"; it measures .510 in most places.  I drilled a 5/16" hole down its long axis, then worked up the nerve to enlarge that to 13/32 (.406), in case I needed to try to use it on the ballscrew, not just to retain the balls while I screw the ballscrew into the nut.  Everything held together. 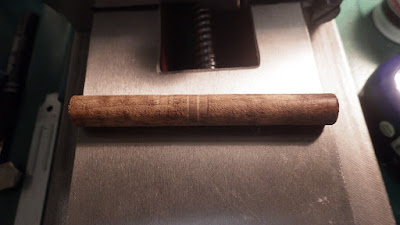 Success.  This BRT (and perhaps a bit more care) didn't displace any of the balls, and I was able to screw the ballnut and mount onto the Y-axis in the mill, gradually (and gently) pushing the BRT out the far end. 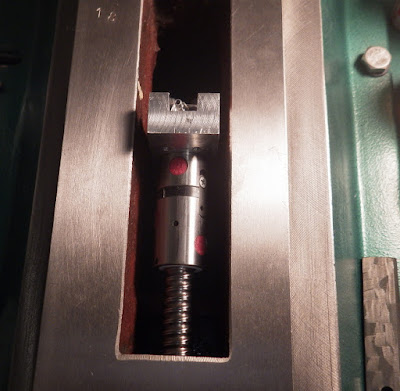 With this in place, I put the cross slide on and checked for ease of motion. 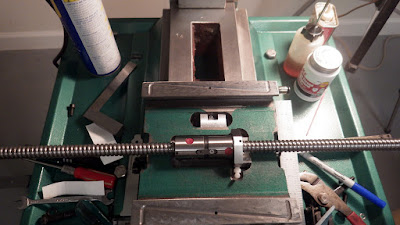 This is both the X and Y axes in place.  I had to hog out that cutout around the white plastic oil fitting on the X-axis ballnut, in the lower front right, this week too.  Time to check out how far the Y axis moves.  It moves 6-1/2"... wait ... Grizzly specifies the original mill at 6-7/8".  I lost motion?  Back to the DVD videos and finally a quick check with Hoss.  The base of the mill needs to be modified to cut away some metal in the front.  To modify that middle picture a bit: 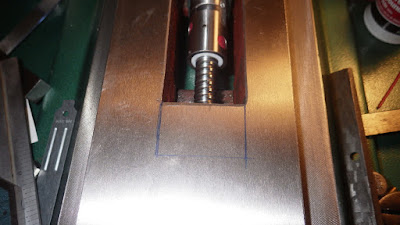 I need to cut out that square.  It's about 1-1/4" on a side.  This is dead space in the mill, and to be fair Hoss does describe this in the modifications, only he describes it as part of the phase two mods and I'm building phase three.  (Hoss modified his mill sequentially and kept improving it.  It means he did things in phase one or two that anyone doing three needs to know.)  Hoss says I should end up with about 9" of travel.  So I get 6-1/2 now, when I add 1-1/4 cutout, that's only 7-3/4.  Not sure where the rest comes from.  I can only get about another 3/4" at the back, at the most.  The cross slide doesn't hit the Z-axis column; and I think it's from crap in the casting hitting something on the back wall. 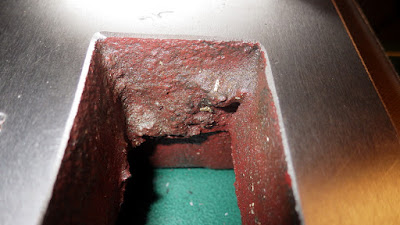 All those bumps on the back wall of the slot are potentially limiting.  If I can pick up 3/4" here, that puts the range over 8" and it's conceivable that there might be some more room in the front.  Hoss gave me this picture to go by. 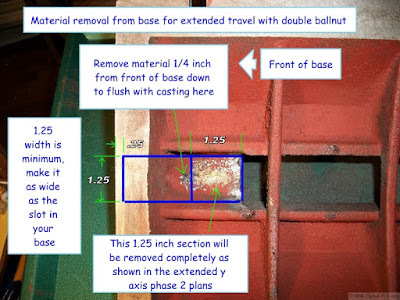 My only real trepidation about this is that it means taking the mill completely apart.  As it is now, the Z-axis is attached to this base, and while I know I need to take it apart, I've been intimidated by the weight.  I have the shop crane but haven't figured out how to do this and where to put it when it's off.  The cutting doesn't bother me; it'll probably be done by drilling a series of holes and cutting between them with a big saw rather than with my micro mill.  My guess is that the base weighs around 30 pounds, and the Z-axis column, motor and all have to go well over 100 pounds.  I don't think my little Sherline can handle the 30 pound piece, and a drill press makes a terrible milling machine.